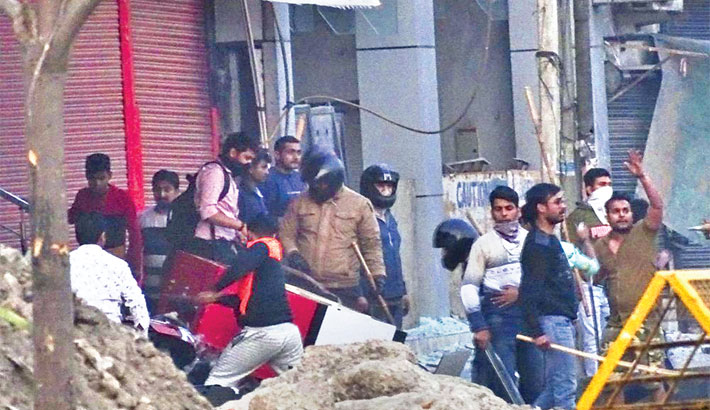 A mob vandalises a shop and damages vehicles during violence between two groups in New Delhi on Tuesday. - AP Photo

New Delhi: After more than three days of unprecedented violence in northeast Delhi, in which 27 people have died and at least 200 injured, Indian Prime Minister Narendra Modi on Wednesday appealed for “peace and brotherhood”, and said he has held an extensive review of the situation in various parts of the national capital, reports NDTV.

“I appeal to my sisters and brothers of Delhi to maintain peace and brotherhood at all times,” PM Modi tweeted, in his first reaction to the violence. Stone-throwing between rival groups, arson and vandalism on Tuesday marked unrelenting violence over citizenship law protests that began on Sunday, with reports of fresh arson and stone-throwing on Wednesday morning.

National Security Advisor Ajit Doval, who has been put in charge of restoring normalcy in the violence-hit parts of Delhi, visited the violence-hit areas to review security this evening and later briefed Home Minister Amit Shah.

The Delhi Police said they have registered 18 FIRs and arrested 106 people in connection with the violence, and that the situation is under control now.

AFP adds: The clashes, which also left almost 200 injured, were triggered by protests against a citizenship law seen by many critics as anti-Muslim and part of Modi’s Hindu nationalist agenda.

They exploded into brutal violence on Monday and Tuesday, with residents forced to flee their homes after seeing dwellings destroyed, a mosque attacked and a tyre market and two schools set ablaze.

“I appeal to my sisters and brothers of Delhi to maintain peace and brotherhood at all times. It is important... calm and normalcy is restored at the earliest,” Modi tweeted on Wednesday.

Delhi’s chief minister, Arvind Kejriwal, a political opponent, called for the army to be deployed and for a curfew to be imposed.

“Police, despite all its efforts, (are) unable to control situation and instil confidence,” Kejriwal tweeted.

Sunil Kumar, the director of the hospital where many of the wounded were taken, told AFP on Wednesday that almost 60 had gunshot injuries and that 16 new patients were admitted on Wednesday.

On Wednesday morning residents cleaned out the blackened interior of a trashed mosque, including a charred Koran, burned out during the violence in the Ashok Nagar area.

A video circulated on social media and verified by AFP showed men ripping off the muezzin’s loudspeaker on top of the mosque’s minaret and installing a Hindu religious flag.

Locals accused the police of doing nothing to help—or worse.

“We tried to make many calls to the police... that people are entering our neighbourhoods chanting ‘Jai Shree Ram’,” said Naeem Malik, referring to a popular Hindu chant.

“But police did not help us at all. We tried to save the women at the protest site but instead policemen started beating us up,” he said, showing wounds on his leg and hands.

Elsewhere a firetruck tried to put out blazes from the previous night, the air thick with smoke from still-smouldering cars, motorbikes, shops and homes.