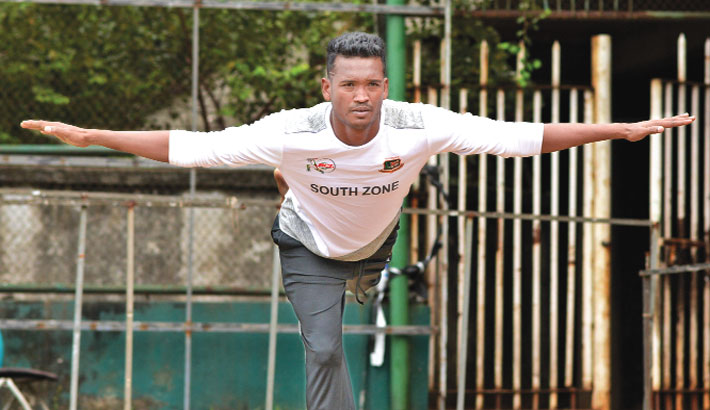 Bangladesh pace bowler Al Amin Hossain said on Wednesday that they are not taking anything for granted against Zimbabwe as things can change quickly in the game of cricket.

Tigers are preparing to board for Sylhet on Thursday to take part in the three-match ODI series, scheduled to held on March 1, March 3 and March 6 respectively.

After their morale boosting win against Zimbabwe in the one-off Test, it is quite usual for Tigers that they might take the visitors lightly in the upcoming ODIs, though Al Amin insisted otherwise.

“We cannot take anything for granted,” Al Amin told reporters at BCB Academy premises on Wednesday.

“We have to play good cricket against every team not only Zimbabwe or Afghanistan because there will always be ups and downs in cricket,” he said.

“Sometimes we perform well and sometimes we don’t and that is the way cricket goes. Even India lost Test against New Zealand. So, there will be both good and bad times,” he said.

“How we will face the bad times and make the best use of the good times is completely up to us,” he added.

Al Amin said that he is looking forward to cement his place across format though national team management insisted that they are considering him for the longer version.

“I didn’t have the chance to be a regular feature for Bangladesh earlier but now I am just trying to give my best whenever I am getting the opportunity. Might be for these reasons, the selector are giving me the chance. Only my work will tell if will be made a regular or not. Against India, I performed reasonable well but I didn’t get call-up from the selectors for the next Test,” he said.

Al Amin who had disciplinary issues earlier, said that he is ready to rectify his mistakes which had put his career on hold.

“I try to be better than what I was three or four years ago. So, I keep that in mind during training and am playing to deliver much better cricket than what I used to some three to four years ago,” concluded Al Amin.