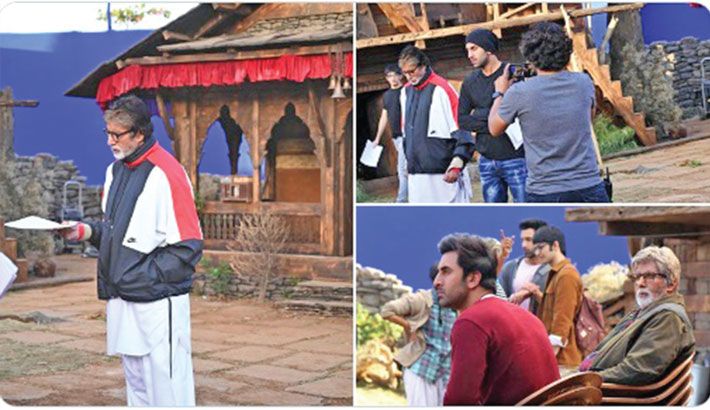 Bollywood megastar Amitabh Bachchan has shared pictures from sets of Brahmastra where he can be seen with Ranbir Kapoor and he has called the young star one of his favourites, suggesting that he needs four of himself to keep up with Ranbir’s “enormous talent,” reports Hindustan Times.

Sharing the pictures, he wrote on Twitter, “T 3452 - .. work starts early .. like 6 am .. rehearsing, blocking and then shooting it .. with one of my favourites .. I need 4 of those s to keep up with his enormous talent!!” The photos give a sense of energy on Brahmastra sets.

Another image shows Ranbir and Big B walking along as someone clicks a picture. The third picture shows both the actors sitting in a chair. The actors are currently shooting for Ayan Mukerji;s Brahmastra that also stars Alia Bhatt, Mouni Roy and Nagarjuna.

In more pictures that Amitabh shared on his blog, director Ayan is also seen with them.He did not even write much on his blog. Blaming an early shooting schedule, Amitabh simply said, “A day of early starts .. 5 am .. on set to block by 7 am .. shoot it by 9 am .. and just got back .. .. with the favourite Ranbir .. … more later .. its at 5 am again tomorrow .”

Amitabh has earlier shared his fondness for Ranbir. Tweeting in 2019, the actor had written, “Thank you, Ranbir Kapoor, for giving me the elixir of LIFE! Still buzzing, buddy!” followed by a number of emojis.

Ranbir had also called Amitabh his inspiration at an event a few years ago. Recalling his time as an assistant director on Black, the actor had said, “My best memory of you (Amitabh) is while I was assisting (Sanjay Leela) Bhansali on Black (2005). Forget film school and acting school, it was when I got to see you live that I received my education.”

Directed by Ayan Mukerji, the film is the first part of Ayan’s fantasy trilogy, produced by Karan Johar’s Dharma Productions. It is set to hit theatres on December 4, 2020.