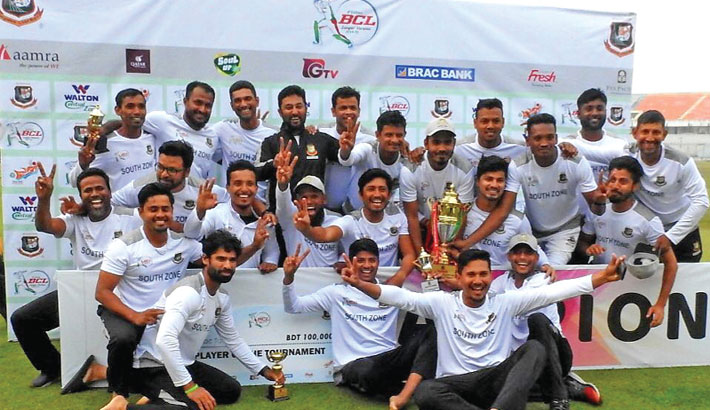 Players of BCB South Zone celebrate with the trophy of Bangladesh Cricket League (BCL) at the Zahur Ahmed Chowdhury Stadium in the port city on Tuesday. — BCB Photo

BCB South Zone, having a mammoth 486 runs in the first innings, resumed the 2nd innings on Tuesday with overnight total of 125 for 8 in 30.1 overs and were dismissed cheaply for 140 runs in just 35 overs, giving a challenging winning target of 354 runs for Islami Bank East Zone in the 2nd innings.

Mahedi Hasan, who was batting with 41 runs for South Zone, was the lone batsman who stayed in the crease for sometimes to score 53 runs off 84 deliveries, hitting five fours and two sixes.

Besides, Mahmudul Hasan (17), Mahmudullah (16) and Anamul Haque Bijoy (10) were the other notable South Zone batsmen reaching the double figure in the 2nd innings.

Chasing a target of 354 runs, Islami Bank East Zone with first innings of total 273 runs, opened the 2nd innings on Tuesday and were all out for 248 runs in 68 4 overs to deprive of their maiden BCL title after suffering a 105-run defeat.

Shafiul Islam and Mahedi Hasan picked –up three East Zone wickets each conceding 56 and 66 runs respectively.  Farhad Reza, who hammered a century for the South Zone in the first innings scoring an unconquered 103 runs, also grabbed two wickets in the 2nd innings on Tuesday and was adjudged man of the match.

Earlier on Saturday, BCB South Zone made a flying start scoring 131 runs in the opening stand by Fazle Mahmud and Anamul Haque Bijoy and later Fazle Mahmud pairing with Al Amin and added another 53 runs for the 2nd wicket making mammoth total 486 runs in the first innings.

National coloured opening batsman Anamul Haque, who scored 501 runs in the league was adjudged the player of the series and batsman of their series while veteran spinner Abdur Razzak, who also performed a great job in the league grabbing 22 wickets, featuring seven wickets in the final on Monday, named as the best bowler of the series.