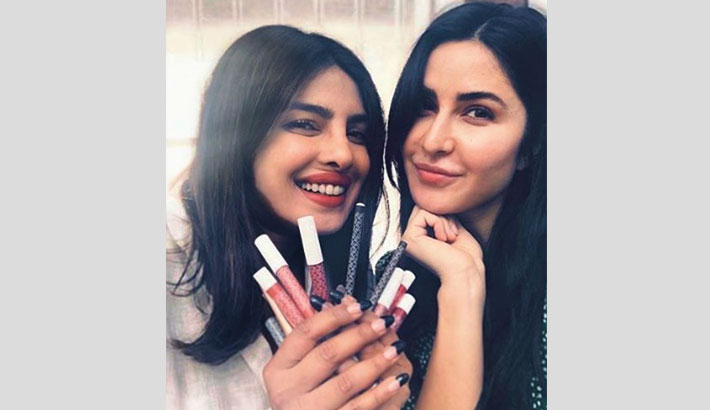 Priyanka Chopra visited her old friend Katrina Kaif recently during her brief India visit. The two actress had a small make-up party and remembered good old days when they used to learn Kathak together. Katrina shared a picture of the two, in which Priyanka is seen promoting make-up products by the former's beauty label, reports India Today.

Sharing the picture, Katrina wrote, "A little make up party #kaybeauty @priyankachopra... from our kathak days at Guruji's... till now it’s always a blast with u @kaybykatrina (sic)."

Priyanka Chopra commented on the post and wrote, "That's almost 17 years! Adore u and so proud of u (sic)." Katrina replied with, "Love you," followed by a heart emoji.

Priyanka Chopra was spotted outside Katrina's home on Sunday. The actress left for the US the same day. She was in Mumbai to attend an event and spared some time to meet her friends. Alia Bhatt was also seen at Katrina's home.

On the work front, Katrina will be next seen in Akshay Kumar's cop film Sooryavanshi, which is directed by Rohit Shetty. The film is slated to release on March 23.

Priyanka, on the other hand, will be seen in Netflix's The White Tiger with Rajkummar Rao. She will also be seen in Sheela, the biopic of controversial spiritual guru Maa Anand Sheela. Her other upcoming projects include Robert Rodriguez’s We Can Be Heroes and the upcoming Matrix movie with Keanu Reeves.