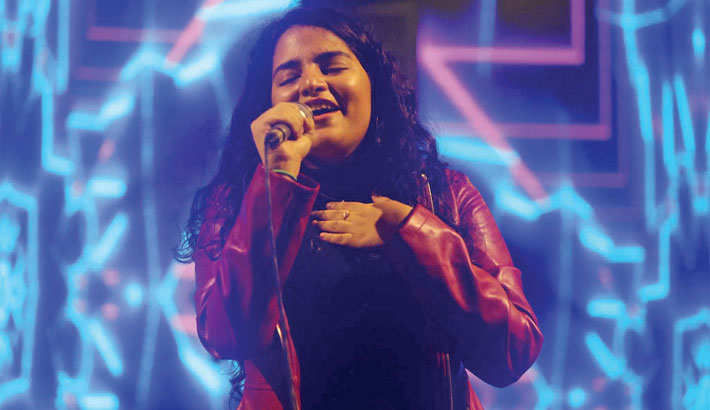 Promising singer Mahdiyah Naim enthralled the audience by her fabulous performance at a show titled ‘AKS School of Rocks’ at Aga Khan School in the capital’s Uttara Area on Sunday.

Mahadiyah and her band group ‘Monochrome’ performed in the show on behalf of her school Aga Khan. Mahadiyah performed two songs titled It’s My Life of Bon Jovi and Zombie of Bad Wolves.

About seven hundred audience enjoyed the songs and praised the singers.

Students of DPS, South Bridge, Aga Khan and Scholastica also performed in the show. Two band groups Nemesis and Arbovirus were present during their performances. Drummer Nafiz of band Arbovirus was a student of Aga Khan School. After 19 years, he performed on the stage.

Talking about her performance, Mahdiyah said, “Arrangement of that day was absolutely different. I enjoyed a lot to perform in the show.”

Mahadiyah Naim is student of Class-XII at Aga Khan School of Uttara. She takes part in stage shows when manages time. She has been rendering song regularly. She has also released her songs on her own YouTube channel, Mahdiyah Naim.