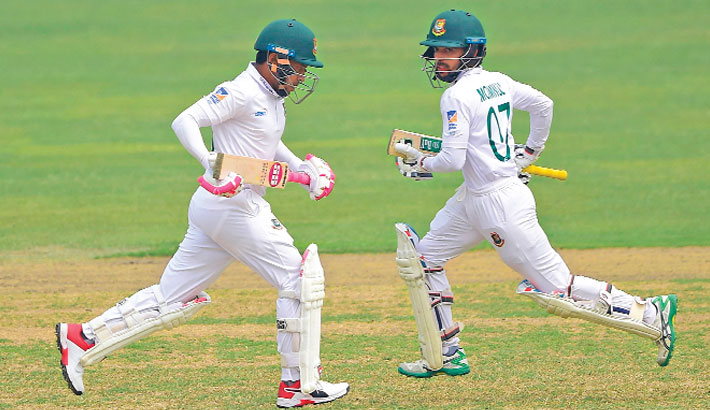 Bangladesh commendable batsmen Mushfiqur Rahim, left, and Mominul Haque run between the wickets in a bid to pile up huge runs against Zimbabwe at Sher-e-Bangla National Cricket Stadium in the capital on Monday. Mushfiqur scores an unbeaten 203 and Mominul makes 132 runs in their innings. – AFP Photo

Bangladesh are eyeing victory in the one-off Test against Zimbabwe as batsman Mushfiqur Rahim hit double ton and skipper Mominul Haque scored a century at Sher-e-Bangla National Cricket Stadium in Dhaka on Monday.

Mushfiq completed his third double century in Tests while Mominul completed his ninth Test hundred to put Bangladesh in the driving position.

Bangladesh dominated the entire three sessions and didn’t give an inch to the visitors.

Mominul got to his 9th Test hundred and Rahim followed it up with a ton of his own in the second session.

Although they lost a couple of wickets in the afternoon session, Rahim batted on and brought up his third double hundred and added a 100+ stand with Liton Das.

Mominul declared as soon as the double was reached and Zimbabwe had 5 overs to see through.

Spinner Nayeem Hasan struck twice in the first over and has given the home side a very good chance to finish the game off.

Nayeem’s double strike late in the day raised the hopes for a rare Test win for Bangladesh as Zimbabwe still need 286 runs to make the hosts bat again.

Mushfiq and Mominul, who made 132, provided the backbone in Bangladesh innings as the hosts dominated the third day’s play after resuming on 240-3.

Mushfiq and Mominul added 222 runs in their fourth wicket stand and made Zimbabwe wait until the second session of the day for their first success.

Mominul hit pacer Donald Tiripano a boundary at mid-off to complete his hundred off 156 balls.

With the innings, Mominul, who was unbeaten on 79 overnight, joined teammate Tamim Iqbal to score most Test century for Bangladesh.

Ainsley Ndlovu took a brilliant reflex catch off his own bowling to dismiss Mominul, who struck 14 fours in his first hundred since becoming Bangladesh Test captain in November.

Mushfiq, who resumed on 32, was one run short of his century at lunch but did not take much time after the break to bring up his hundred cutting Ndlovu for a boundary through cover point.

Ndlovu also removed Mohammad Mithun for 17 to give Zimbabwe something to cherish, which also slowed down Bangladesh free flowing innings.

Mithun got a bottom edge as he tried to cut Ndlovu. Liton then made 53 runs before he fell to off-spinner Sikandar Raza.

Liton also tried to cut a ball that was spinning in as Regis Chakabva took his fifth catch in the innings, the highest by a wicketkeeper in a Test innings.

After Liton’s dismissal, it was Mushfiq all over as the senior Bangladesh campaigner upped the tempo in the innings with a looming declaration.

Zimbabwe earlier were bowled out for 265 runs in their first innings with their skipper Craig Ervine making highest 107 runs.

Pacer Abu Jayed and off-spinner Nayeem finished with 4-71 and 4-70 respectively.