Tourism and conservation of biodiversity 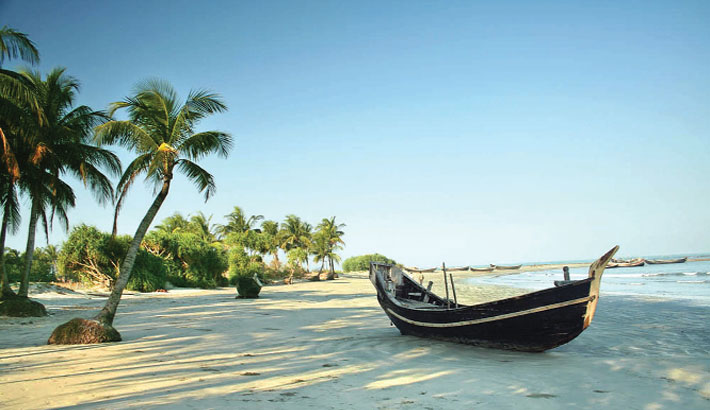 Saint Martin’s, a coral-bearing island in the Bay of Bengal, is located at the south-east corner of the country. The island is totally separated from the mainland. The distance of St Martin’s island from the last land border at the south-east of Bangladesh (known as Bodarmokam) is about 9 kilometres. It is located on 590 hectares of land with a population of  around 9,000. The island has immense ecological importance and is blessed with biodiversity resources. It has become one of the destinations for tourists. A good number of species like multicolour fishes, coral associated fishes, crab, mammals, birds, corals and sea turtles et cetera are found around the island. Of them 66 species of coral, 153 species of marine algae, 240 species of marine fish( 86 sp. coral associated, 187 species of shell and snails,10 species of crabs, 3 species of marine turtles 53 species of migratory birds, 4 species of marine mammals(dolphin and porpoise) and 157 species of angiosperms(including Keya and mangrove) have been recorded.

The island is famous for tourism. Over the last few years, tourism-related activities have  increased. But, tourists are found to be engaged in illegal activities such as stealing live corals and other lives for souvenirs, fishing within the marine protected areas. Moreover, natural and other anthropogenic activities also put the island at stake in respect of biodiversity.

According to 1995 environment conservation act the government has declared the island an Ecologically Critical Areas (ECA) in 1999.

Major threats to the island and its biodiversity and ecosystem: the number of visitors exceeding beyond the carrying capacity of the island, transfer of land to the outsiders resulting in conversion of land for unauthorised hotel-motel-resort construction defying government order, huge waste generated by the visitors, hotels and ships, unsustainable extraction of ground water and fear of contamination, destruction of vegetation of the island, collection and trade of corals, mollusks and other marine and beach species, disturbance to the wildlife and habitat by beach lighting, camp fire, beach hiking, noise pollution, watching/ chasing turtles and collecting eggs.

The government should immediately take following steps to ensure biodiversity and healthy ecosystems in Saint Martin’s Island. As the island is an Ecologically Critical Area as declared by the Department of Environment (DoE), Government of the People’s Republic of Bangladesh in 1999, it is better to deliver single ownership to DoE over Saint Martin’s Island to coordinate and manage all activities in the island. An integrated management plan must be implemented emphasising biodiversity conservation and ways to operate ecotourism practices in the island. Moreover, the plan must address continuous research and development options, education and awareness and socio-economic issues for preserving biodiversity of the island. It is of no doubt that present tourism practices are not in favour of biodiversity conservation. To minimise the threat, the government should limit the maximum number of passengers considering the carrying capacity of the island. The tourism in Saint Martin’s Island might be operated through registered tour operators and the tour operators will pay fixed amount per tourist to develop conservation fund which will be used for activities like conservation of biodiversity, education and awareness purposes and alternative livelihood strategies for the islanders.

Saint Martin’s Island is a wonderful gift of nature. The island is under threat of losing its scenic beauties and biodiversity due to manifold pressure. The government with support from local people, individuals and non-government organisations must strengthen existing efforts to save this precious island and help flourish its biodiversity.

The writer worked as a consultant to contribute to the conservation of biodiversity in the island. However, the views expressed here are of writer’s own.