Giving up wicket-keeping pays off for Mushy 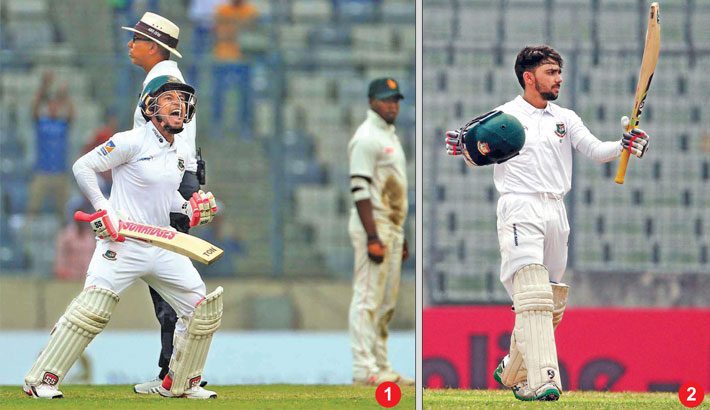 Bangladesh batsman Mushfiqur Rahim said on Monday that though it was a difficult decision for him to let go of wicket-keeping in Test cricket, he is happy that it provided dividend for him in the long run.

Mushfiqur registered his third double century in Test cricket and took his tally of centuries to seven in the format and the occasion has been a huge one as it was his first century playing a Test as a pure batsman.

Mushfiqur scored unbeaten 203 runs and in the process became the leading run scorer of the country by surpassing Tamim Iqbal.

Mushfiqur has kept the wickets in 55 of 70 Tests, scoring 3,515 runs at an average of 37. That number goes down to 24.47 in 12 Tests in which he was not a designated wicket-keeper when team management stripped him off keeping duties.

However, it was not the case when the diminutive batsman, who was earlier adamant not to relinquish keeping duties, decided that he need to take the route followed by legendary Sri Lankan wicket-keeping batsman Kumara Sangakara, who decided not to do both the jobs in order to concentrate on his batting in the longer format.

Mushfiqur took 15 Tests to register a century playing as a pure batsman in the fold. With the feat, the right-handed batsman emerged as the top Bangladeshi batsman with most runs in the format surpassing Tamim Iqbal. Mushfiqur is now at the top with 4413 runs in 130 innings while Tamim is at number two with 4404 runs in 115 innings.

Mushfiqur’s decision to not keep the wickets in the longest format of the game and focus on his batting has been a point of discussion for a long time now. Occasions have been many when Mushfiqur was made to play as a batsman in Test by the team management to which the right-handed batsman did not fully agree to until October 2019.

Ahead of Bangladesh’s tour to India, Mushfiqur came to the decision that he will give up his wicket-keeping job and since then the decision has been providing him dividends.

During the tour to India, Mushfiqur in four innings scored a 43 runs, 64 runs and 74 runs while most of his fellow batsmen struggled. In his third game since his decision to play as a pure batsman, Mushfiqur touched glory as he added 203 runs to the board that too while staying unbeaten on day three of the lone Test against Zimbabwe at Sher-e-Bangla National Cricket Stadium on Monday. Immediately after Mushfiqur’s heroics, Bangladesh captain Mominul Haque declared the innings on 560 runs for 6 wickets with a lead of 295 runs.

Despite the success, Mushfiqur believes that keeping the wickets had helped him concentrate on the field but at the same time after being relieved from the role, he is more relaxed and thinks more about his batting.

“There have been many occasions when I batted well after keeping. I still feel that it helps when you are behind the wickets. Now, I need to take information from Liton (Das) about the behaviour of the pitch. These (playing as a batsman and as a wicket-keeper) are different things,” said an elated Mushfiqur at the post-day press conference on Monday.

“It is also true that I am getting old now, so letting go of the keeping duties helps me stay relaxed. You can say that it is reflecting on my batting. I miss keeping but I respect the decision taken by the team and will try to contribute for the team the way they think is right,” former Bangladesh Test captain added.

On the day Bangladesh had gone into lunch with Mushfiqur unbeaten on 99 runs when the game resumed, the former Bangladesh captain in all formats reached his seventh Test century. All of the previous six centuries by the 32-year old batsman had come playing as a wicket-keeper batsman. Mushfiqur eventually batted seven hours and forty three minutes to get to his third double ton.

Mushfiqur was determined not to get carried away by the hundred as he had something to prove to his critics who raised doubt about his place in the playing eleven after he opted not to travel to Pakistan for security reason. His critics told that his replacement must get enough time in the middle and changing the batting order for the lone Test against Zimbabwe after returning from Pakistan won’t be a good example for his team mates.

There was a speculation that Bangladesh Cricket Board (BCB) will let him play in the Zimbabwe series only if he decides to play the last leg of Pakistan tour, comprising of one ODI and one Test.

The way he celebrated his hundred and the double hundred indicated that he is relieved more than anything else but not before showing his discontent at the recent media outcry which surrounded him since he decided not travel to Pakistan.

“This is not revenge or anything (attached with my celebration) like that and I was never like that in my entire career,” said Mushfiqur.

“Basically I don’t plan my celebrations but my son is fond of dinosaur and I tried to emulate that after scoring the double century,” he concluded.