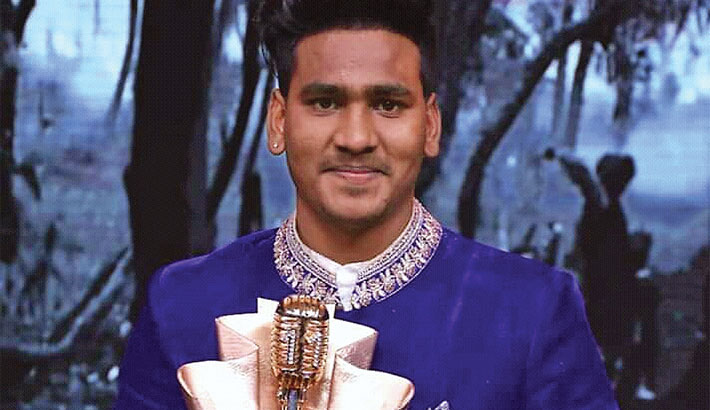 On Sunday, Sunny Hindustani from Bhatinda in Punjab was declared the winner of the music reality show, Indian Idol 11. The talented singer beat four other finalists to take home the coveted trophy, reports Hindustan Times.

Sunny, who has wowed all from the time he came for his audition, sang a medley of songs including Mere Rashke Qamar, Bhar Do Jholi Meri and Halka Halka Suroor. Apart from the winning amount, Sunny also received a car and a contract to sing for T-Series. The four other finalists include Ankona Mukherjee, Adriz Ghosh, Ridham Kalyan and Rohit Raut. While Rohit was adjudged the first runner-up, Ankona was declared the second runner-up.

After winning the trophy, Sunny was quoted in The Indian Express as saying, “I had not thought of getting through the first round, leave alone winning the competition. I have come a long way and can’t believe that the journey has just started. From getting the opportunity to sing on such a big platform to winning the show is like all my dreams come true. I will always be thankful to the judges for mentoring and guiding me and to Sony Entertainment Television for giving me a platform to perform in front of legends of the music industry and an opportunity to meet so many stars. I can’t believe that the whole of India heard my voice and voted for me wholeheartedly to make me Desh ki Awaaz.”

As per a report in Times of India, the talented singer, who mostly sang famed Pakistani singer Nusrat Fateh Ali Khan’s songs, had sung Afreen Afreen for his audition. The performance had taken the judges by surprise, with one of the judges Anu Malik (who was later removed following #MeToo accusations) declaring he felt the ‘rooh (soul)’ of Nusrat in Sunny’s voice.

Even industrialist Anand Mahindra had shared the clip of his audition performance on social media. Diwali is the perfect day to learn about people who Rise. A friend sent me this saying he was in tears watching it. Find the whole clip on YouTube & I challenge you to remain dry-eyed. TV & social media have done us a great service: Discovering talent in the humblest locations.

Sunny’s performances have been consistent and for that he has always been applauded. On Sunday’s finale too, both Ayushmann Khurrana and Neena Gupta, guests on the show, showered praises on him. Actor couple Kajol and Ajay Devgn too were full of praise for the talented youngster, during their visit to the sets for the promotion of their film Tanhaji: The Unsung Warrior.