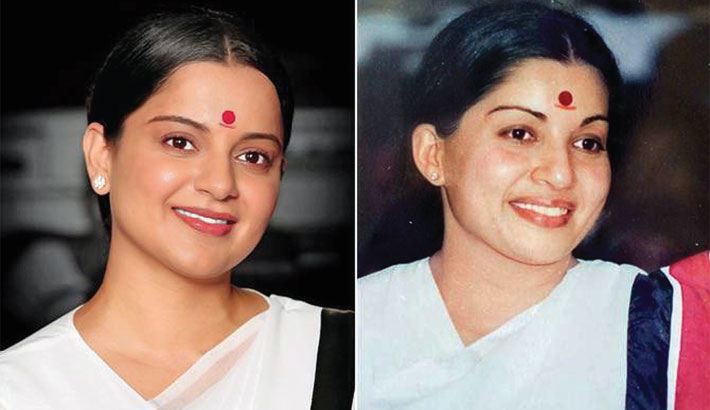 Over the past few months, Kangana Ranaut has been single-mindedly focusing on Thalaivi, the biopic on the late J Jayalalithaa and arguably the actor's most defining film. To mark the 72nd birth anniversary of the late chief minister of Tamil Nadu today, the makers of the biopic shared an exclusive glimpse of Ranaut in her politician avatar. While the first look that was unveiled last year reflected the politician in the autumn of her life, the new image sees Ranaut as a 30-something Jayalalithaa as she forays into politics, reports mid-day.

AL Vijay, who is helming the multi-lingual (Hindi, Tamil and Telugu), says, "The film depicts the early years and struggle she faced, both as an actor and a politician."

From being a young actor who was forced into the profession by her mother, to finding a mentor in MG Ramachandran and rising to power in politics despite having a formidable adversary in M Karunanidhi, Jayalalithaa was as controversial as she was charismatic. The director insists that his offering will be an unvarnished depiction of her life. Explaining that he has kept cinematic liberties to the minimum, he adds, "Her life was a mix of glamour, love, heartbreak, struggle and success. Our focus is to make it as real as possible, without trying to glorify her, but to show the human side of the person she was."

Give Ranaut a meaty role, and you can be assured she will sink her teeth into it. The director says that the leading lady has brought a fierce quality to her muse, who was a firebrand. "Kangana's dedication towards playing the character [shows in the fact that] she has gained weight to stay true to the stage of [Jayalalithaa's life] that she is portraying.

Her attention to details, like makeup and costumes, will make it a visual treat for the audience; they will feel they're watching Jayalalitha herself on screen."