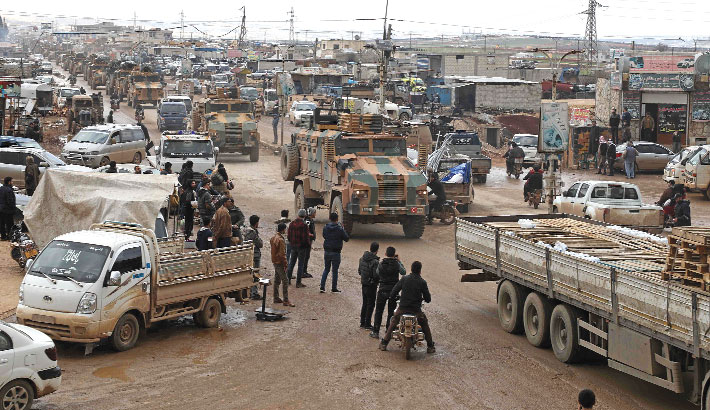 Residents watch as a Turkish military convoy that crossed from the border with Syria passes through the Syrian rebel-held town of Hazano in Idlib's northern countryside, on Saturday. - AFP PHOTO

ANKARA: Turkish President Recep Tayyip Erdogan on Friday urged his Russian counterpart Vladimir Putin to halt the Syrian regime's offensive in northwest Syria as France called for an urgent summit with those leaders to end the bloodshed and humanitarian crisis, reports AFP.

Russian air strikes in the northwestern province of Idlib are bolstering a months-long Syrian government onslaught that has forced nearly one million civilians to flee -- the biggest displacement of the nine-year conflict.

"The president during the call stressed that the regime should be restrained in Idlib and that the humanitarian crisis must be stopped," the Turkish presidency said in a statement after the two leaders spoke by phone.

Putin, for his part, told Erdogan that he was "seriously concerned" by the "aggressive actions" of jihadists in Syria's Idlib region.

In their call, Putin and Erdogan agreed to "intensify bilateral consultations on Idlib with the aim of reducing tensions, guaranteeing a ceasefire and neutralising the terrorist threat", the Kremlin said in a statement.

Erdogan told Putin the solution was to return to the Sochi agreement they signed in 2018, which allowed Turkey to establish military posts across Idlib designed to prevent a regime assault.

That deal has been increasingly set aside as Syrian forces advance steadily into the region.

Turkey, which backs some rebel groups in the province, has lost 16 military personnel this month in clashes with Syrian troops. It has reinforced its positions and called on President Bashar al-Assad to pull his forces back.

In Brussels, French President Emmanuel Macron on Friday called for a summit on Syria "as soon as possible" with the leaders of Germany, Russia and Turkey.

Speaking on the sidelines of an EU budget summit, Macron said the Syrian offensive "risked provoking a humanitarian catastrophe, an escalation of the conflict and a migration crisis."

In 2015, EU countries split sharply over how to cope with their worst migration crisis since World War II when around a million people, most of them fleeing Syria, entered the bloc.

Turkey meanwhile is determined to prevent a fresh influx of displaced people adding to the 3.6 million Syrian refugees it already hosts.

With Ankara threatening an "imminent" operation against the Syrian regime, Defence Minister Hulusi Akar inspected troops gathered at the Syrian border on Friday.

Erdogan spoke of establishing a "safe zone" to provide shelter and support to fleeing civilians facing harsh winter conditions, adding that Turkish organisations were already building structures in the area.

"Our work continues. We will have a discussion with Putin. I hope we will take a beneficial step with this," he said.

During their meeting in Berlin on Thursday Merkel and Macron called for a four-way summit on Syria when they spoke by telephone with Putin and Erdogan.

A Kremlin spokesman told reporters on Friday that "the possibility of holding a summit is under discussion", but that there was still no decision.

Syrian aid workers have put out desperate calls for a ceasefire and international help.

The United Nations says 900,000 people -- more than half of them children -- have been displaced in "horrendous conditions" since December 1, when the latest offensive began.