Kings off to flying start 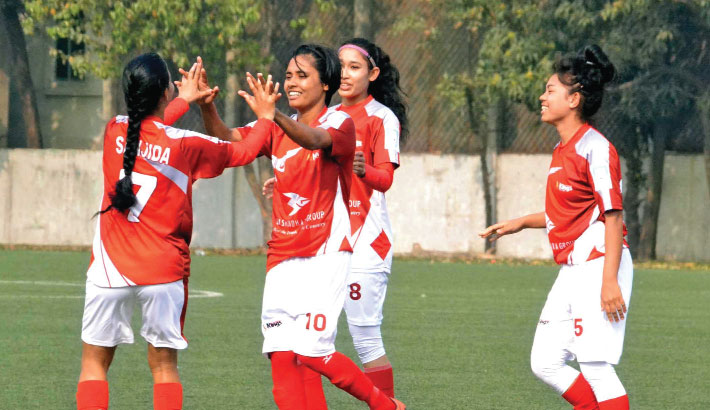 Kings put pressure on their opponents from the very beginning of game. Kings captain Sabina, who is also the captain of Bangladesh National Women’s football team, opened account for her side in the 1st minute (1-0).

Another national colored booter Krishna struck twice with headers in the 3rd and 11th minute both from the corner-kicks by Midfielder Sanjida Akhter (3-0). Moushumi added two more goals in a span of couple of minutes before the half-time (40th and 41st minutes) (5-0).

Despite having a 5-0 goal lead, Kings started to play pressing football from the beginning of second half. Sabina scored her second goal in the 46th minute (6-0). Krishna, who scored two in the first half, completed her hat-trick utilising a pass from defender Nilufa Yeamin in the 55th minute (7-0).

Defender Sheuli struck the eighth goal for Kings converting a penalty in the 57th minute (8-0). Just after six minutes, Sabina completed her hat-trick scoring her third goal in the 63rd minute (9-0). Nargis netted her lone goal of the match in the 83rd minute (10-0) while Maria buried the ball from a direct corner-kick in 87th minute (11-0). Krishna netted her fourth in the 90th minute while Anwara SC Goalie Asa Kormokar made a blunder inside the box (12-0).

Country’s first women referee from FIFA Joya Chakma officiated the game. After the match, Kings Coach Mahmuda Khatun said, “We played well today. Our plan was to play the attacking football and to clinch a big-margin win against them (Begum Anwara Sporting Club). We did it but we were also expecting more competition in the match.”

Kings key player Krishna said, “Coach instructed us to play attacking football. We just followed her instructions. I have scored today and I want to continue it in the next matches.”

On Sunday, Kumilla United will face Jamalpur Kacharipara Akadas at 12 pm and Nasrin Sporting Club will take on Spartan MK Gallactico Sylhet FC at 3 pm, both at the same venue.