Had ‘Plan B’ to deal with spinners: Ervine 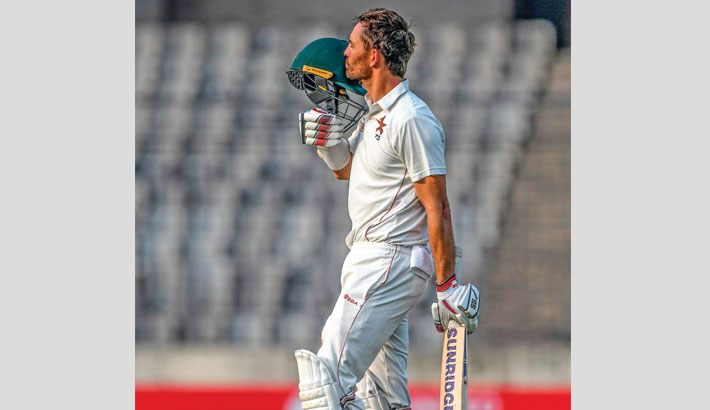 Zimbabwe captain Craig Ervine celebrates after scoring a century (100 runs) during the first day of their first Test against Bangladesh at the Sher-e-Bangla National Cricket Stadium in the capital on Saturday. — AFP Photo

The interim Zimbabwe skipper Craig Ervine said that Bangladesh spinners bowled well on the first day but he had his plan B which seemed to worked out quite well for him as he scored his third Test century at Sher-e-Bangla National Cricket Stadium on Saturday.

“I think upfront they bowled very well. They hit the good spots,” Ervine told reporters at the post-match press conference.

“I tried to use my reverse sweep and the lap as an effect to not really unleash the full-sweep because I just felt that they are very consistent with their areas,” he added.

“If you do not have plan B for your strikes then it becomes a very long day for you. You need to have some backup shots as well to able to get off strike,” Ervine said.

When the Zimbabwean skipper came into the crease, it was a very crucial situation for his side as they lost opener Kevin Kasuza just after 7 runs.

But Ervine managed to play a captain’s knock while he was able to take the pressure off his team building a 111-run second wicket partnership.

Ervine said that it was not easy when he first came into the crease but said that he slowly managed to settle down with the pace of the crease which eventually helped his to achieve his third career hundred in longer version cricket.

“I think it is always difficult to come in and start the innings. Once you get in, you get the pace of the wicket. I think it is just same case for the other guys as well. They tried to apply themselves when they first got in. I would tell them to be patient and not panic,” Ervine told reporters.

Prince Masvaure, who paired up with Ervine for the 111-run second wicket partnership, was second highest run maker for Zimbabwe side.

The first day ended with Ervine’s wicket as the visitors will be starting the second day with 228 runs and 4 wickets in hand.

It will be a tough task for the visitors to stretch the innings much further as they have no set batsman left on the crease.

Ervine was disappointed with his dismissal just at the end of the day but the Zimbabwean interim skipper is confident of Regis Chakbva and also with the ability of the new batsman Donald Tiripano who will be starting the day for them.

“Me getting out at the end, took the scale a little bit down. It would have nice for me to come in tomorrow (today) with Ragis Chakabva and two recognised batsmen. I think Donald Trimamo is very handy with bat. It will be up to him and Chakabva to get through the first session,” Ervine concluded.