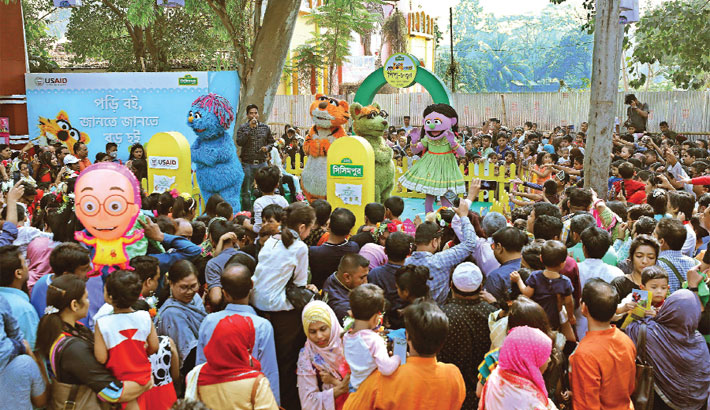 From 8am in the morning, people from all walks of life started converging on the Bangla Academy premises and Suhrawardy Udyan.

With the rolling of time, the crowd turned bigger.

On the special day, people flocked to the fair with their friends and family members after paying homage to the Language Movement martyrs at the Central Shaheed Minar.

Visitors were seen standing in a long queue at the entry of the fair being held on the Bangla Academy premises and at nearby Suhrawardy Udyan.

People of all ages, especially students and parents with their children, were found browsing through books at different stalls and pavilions.

Shakil Afsar, a student of Dhaka College, said, “I along with my friends came to the book fair to buy some books after paying tributes to the martyrs by placing wreaths at Shaheed Minar.”

Like Shakil, many students were seen visiting the book fair with their friends.

The Shishu Chattar (Children’s Corner) at the Suhrawardy Udyan was jam-packed with parents and children. The stalls at the corner were also spontaneous with their sales.

Lily Akter, a homemaker, who brought her four-year-old son Fahim, said, “The 21st February has a special significance for the country and its people and, most importantly, the new generation needs to be introduced with the history.”

“We went to Shaheed Minar in the morning and paid tributes to the martyrs by placing wreaths there. Now, I have brought my son to the fair to see the books and learn more about the Language Movement and know the history,” she said.

Wahid Jamal, who came from Dhanmondi with his five-year old son, said, “I enjoyed the moments with my son. I bought him some children’s books on adventure, ghost stories and drawing chosen by him.”

Meanwhile, many people, who live far from the book fair venue and who cannot visit the fair in working days, took the chance to pay tributes to the martyrs and visit the fair on the national holiday.

For example, Sumon Ahmed, a private firm employee, said, “I can’t visit the book fair for my job. As today is a holiday, I took the chance to visit the fair along with my wife and children.”

The sale also increased on the day. A salesman at Jhingephul stall said, “We are satisfied with our sales.”

On the day, Bangla Academy organised a self-penned poem recitation on the academy premises at 7:30am where 120 poets from across the country along with some Indian poets recited their poems.

Every day, a good number of new books are being published. According to Bangla Academy information desk, a total of 2,881 new books arrived till Thursday.

This year, the land earmarked for the fair was expanded to 8,00,000 square ft. A total of 873 units were allocated to 560 organisations.

The authorities allotted 179 units at the Bangla Academy ground to 126 organisatons and 694 at the Suhrawardy Udyan to 694 organisations.

The book fair remains open from 3pm to 8:30pm from Sundays to Thursdays; and from 11am to 8:30pm on Fridays and Saturdays. On February 21, the fair remained open from 8am to 9pm.