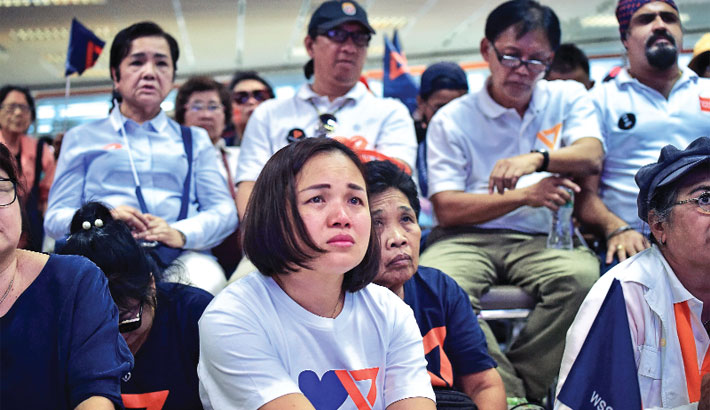 Future Forward Party supporters react to the constitutional court’s verdict to dissolve the party at the political party’s headquarters in Bangkok on Friday. Future Forward Party, a stridently anti-military Thai party, was dissolved on the day and its key members banned from politics for a decade over a $6 million loan by its billionaire founder, a withering blow to the kingdom’s pro-democracy movement. —AFP PHOTO

BANGKOK: A stridently anti-military Thai party was dissolved Friday and its key members banned from politics for a decade over a $6 million loan by its billionaire founder, a withering blow to the kingdom’s pro-democracy movement, reports AFP.

The ruling could edge a politically febrile kingdom — whose economy is shrinking — closer to the street protests, which have scored much of the last 15 years of Thai history.  The Future Forward Party (FFP), fronted by the charismatic auto-parts scion Thanathorn Juangroongruangkit, emerged from nowhere in March last year to become Thailand’s third biggest party in the first elections since a 2014 coup.

The party’s radical agenda — calling for full democracy, an end to conscription and the removal of the army from politics and business — won it 6.3 million votes and pitched it against the powerful, conservative military. But since their strong poll showing, Thanathorn and his 76 lawmakers have faced relentless rounds of legal cases in Thailand’s courts.

The loan exceeded the $315,000 limit on donations to parties by an individual, one judge said. Panya Udchachon told the court that “party executives must have known that a loan of that amount would give influence (to Thanathorn) and he could gain advantage over the party.” Sixteen party executives, including founder Thanathorn, were also “banned for running for political office for 10 years,” judge Nakarin Mektriarat added.

The same court has taken out several pro-democracy parties since 2008 and knocked two anti-establishment prime ministers from power.

The ruling appears to put a pin in the immediate political aspirations of Thanathorn, whose emergence on the Thai political stage has inspired millennials but frightened the country’s conservative establishment. “I don’t understand why they do this. Do they want people to come out on to the street?” a desolate FFP supporter at the party headquarters told AFP, requesting anonymity.

Thailand has seen several rounds of bloody competing street protests roughly between those who support democracy and those who buttress the royalist army establishment, which draws on the support and wealth of the kingdom’s oligarchs.

Thailand’s economy is on the ropes — freshly winded by the sharp tail-off in tourism as fears over the coronavirus slow travel — while patience with the army-affiliated government of Prayut Chan-O-Cha is running out.

Prayut led the the 2014 coup against the elected government of Yingluck Shinawatra.

But the gaff-prone former army-chief is openly ridiculed since restrictions on free political expression were eased last year.

Thanathorn, whose wealth had appeared to gift him a shield of sorts, has been a fierce critic of military involvement in politics in a country whose history is peppered with coups.

Future Forward MPs remain lawmakers but have 60 days to find another party in parliament.

The party could also relaunch, but without its charismatic key executives is likely to struggle to keep the same number in their ranks.