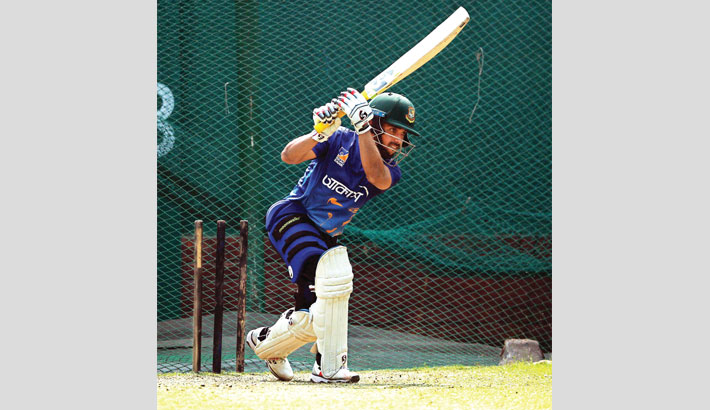 Bangladesh skipper Mominul Haque plays a shot during a training session at the Sher-e-Bangla National Stadium in the capital on Friday. - BCB Photo

Bangladesh will look to break their losing streak when they take on visitors Zimbabwe in the one-off Test starting at Sher-e-Bangla National Cricket Stadium on Saturday.

However the pressure will be immense on Bangladesh, coming into the game on the back of six consecutive Tests off which five have come as innings defeats.

Criticism has come in plenty for Bangladesh for their below-par performance and adaptability in longer version not only from the media or the supporters but also from within the Bangladesh Cricket Board (BCB).

BCB President Nazmul Hasan Papon on Wednesday took to the media revealing his disappointment about team’s performance and had cited that he sees no hope in Bangladesh winning this Test against Zimbabwe.

Under such circumstances, Bangladesh will look to recover but not by compromising their new vision to wield a novel Test culture. Bangladesh are traditionally dependent on its spin attack at home and major part of its success in Test has come riding on this department. But this also has its consequences with the pace bowling department getting less exposure and suffer when they play away from home.

With this vision Bangladesh are very likely to field two seamers in the eleven with Abu Jayed Chowdhury and Ebadat Hossain in action alongside two spinners. The batting line-up compared to the previous Test, against Pakistan earlier this month, will not feature Mahmudullah after being put off from the format for below par performance. The bright side is that wicket-keeper batsman Mushfiqur Rahim is coming back into the fold after missing the Rawalpindi Test.

For visitors Zimbabwe, the side will look to carry their good form in the format but in the absence of their regular captain. The side had set foot in Dhaka last week with good memories of competing well against Sri Lanka at home and will be eager to capitalise on the fact that Bangladesh are on the back-foot. Major responsibilities will be on the three seniors namely Sikandar Raza, Brendan Taylor and stand-in captain Craig Ervine.