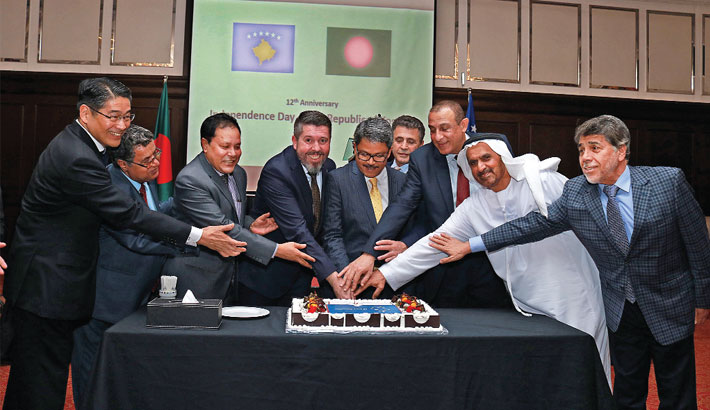 State Minister for Foreign Affairs Md Shahriar Alam and newly-appointed Ambassador of Kosovo to Bangladesh Guner Ureya along with others cut a cake at a city hotel on Thursday on the occasion of the 12th anniversary of Independence Day of Kosovo. - SUN PHOTO

State Minister for Foreign Affairs Md Shahriar Alam on Thursday said that Kosovo is a good friend of Bangladesh and the friendship between the two countries is rooted in the common values and principles.

“Both Bangladesh and Kosovo are familiar for the sacrifices for independence. The common journey to independence is another reason for the two countries to become close to each other,” he said while addressing a reception on the occasion of the 12th anniversary of Independence Day of Kosovo.

Speaking on the occasion, newly-appointed Ambassador of Kosovo Guner Ureya said over the twelve years, as the newest country in Europe, Kosovo has made remarkable progress in every field and it’s a functional, prosperous, stable and multi-ethnic state with a diverse society and steadily growing economy.