Language Movement in a Small Town

One of the greatest shortcomings in the perception of our Language Movement in 1952 is our consistent failure to recognise the role of school students in the glorious movement outside Dhaka city. In fact, the role of school students is largely ignored, denied and misinterpreted in our mainstream history. This is because of our general tendency to think of an urban-based movement. But our Language Movement which has involved the entire population of the country has been a struggle through which a united nation asserted its love for the mother language. Such a movement did not take place merely in Dhaka city, but also in small towns.

Here is one such story:

In the year of 1952, Nilphamari was merely a small sub-divisional town in Bangladesh, the then East Pakistan. The students of Nilphamari Government Boys’ High School (then High English School) spontaneously took part in the Language Movement. This was the lone boys’ high school in the small town. Their ‘Headsir,’ Asir Uddin Ahmed, motivated them to take part in the Language Movement. Later in 1971, Ahmed’s son Captain R A M Khairul Bashar, ASC, a Freedom Fighter, laid down his life for the cause of Bangladesh. Our ‘Headsir’ was the first Bengali Muslim headmaster of the more than a century-old High English School. Not only an educationist, but he was well-aware about progressive politics. At that period, he realised that our people should be allowed to use their mother language and that no attempt should be made to impose any alien language in the guise of state language. He also realised that if Urdu is imposed as the state language on our people then it would provide a tool to the West Pakistani rulers to exploit the people of Bangladesh.

On February 4, 1952, Language Movement started from this school. Muslim Chhatra League called strike at all educational institutions with a demand for recognition of Bangla as a state languages of the then Pakistan. The headmaster had firm faith in the goodness and power of his students. He asked his students to assemble at the school  ground. Accordingly, they assembled there. At this stage, he asked them to raise their hands who want to join the Language Movement. In response, most of the students raised their hands. But, Bihari students, sons of Urdu-speaking people who migrated to Bangladesh from Bihar, India, following partition of the Indo-Pak sub-continent in 1947, and pro-Muslim League students stayed away from the movement.

Because of the inspiration of the ‘Headsir,’ a charged atmosphere was created at his school. Majority of students raised slogans demanding Bangla as a state language. They held demonstrations and rallies in the town and observed total strike at the school. The Urdu-speaking students and pro-Muslim League activists, in collaboration with the local administration, flexed muscle to foil the life and death movement of the students, but to no avail. 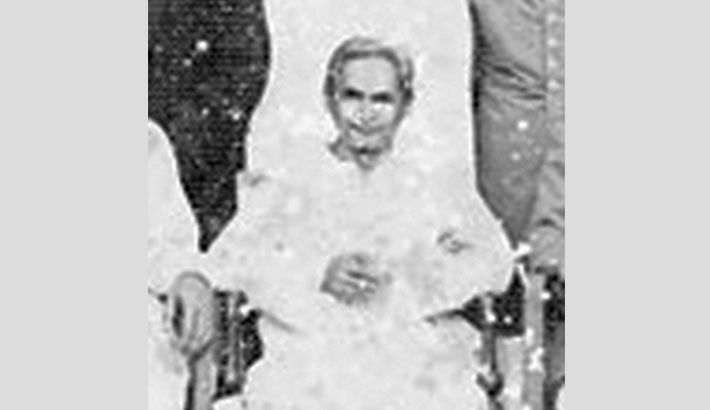 Asir Uddin Ahmed motivated his students to take part in the Language Movement.

Student leaders like Shafiar Rahman, Shamsul Islam, Mahbubur Rahman Dulu, Shawkat Ali and Hemonto Roy were at the forefront of the agitation. The agitation infuriated the then Urdu-speaking sub-divisional officer (SDO) of Nilphamari, Monowar Hossain Chowdhury. He publicly misbehaved with the ‘Headsir,’ Asir Uddin Ahmed. Perhaps he thought that his misbehaviour with him would dispirit the school students. But all of his estimates and expectations went in vain. The SDO’s insult to the ‘Headsir’ created traumatic effects on students. Ultimately, the students’ agitation turned into an agitation against the insult hurled at their most favourite teacher. The students enforced strike at their school for three consecutive days from February 8 till February 10. They demanded immediate removal of the SDO as well as realisation of Bangla as the state language.

The entire scenario changed on February 21 as the news of killing Rifiq, Salam, Barkat, Jabbar, Shafiq and others in police firing in Dhaka reached Nilphamari. The movement reached every corner of the sub-division. An all-out strike was observed in all educational institutions of Nilphamari town on February 21.

A massive rally was held on the premises of Nilphamari High English School Muslim hostel. On February 22, hundreds of people took part in processions defying restrictions of the local administration. Practically, Nilphamari town turned into a town of rallies and processions. Khairat Hossain, then a member of the provincial assembly elected from Nilphamari, walked out of the assembly. Moulana Abdur Rashid Tarkobagish followed the suit. From Dhaka, Khairat Hossain used to give valuable directives to the leaders of the language movement in Nilphamari. Police arrested him on February 23. On February 24, 25 and 26, hundreds of people from all walks of life took to the streets of Nilphamari town chanting fiery slogans demanding release of Khairat Hossain and other political prisoners.

Meanwhile local Awami Muslim League convener Dabiruddin Ahmed and Abu Nazem Mohammad Ali were arrested on February 26. Agitating people besieged the local police station. As the situation deteriorated, the police authorities made a fervent appeal to the local leaders to calm down their loyalists.

Being nervous, police prepared a list of the local leaders to be arrested. Police arrested the local unit Muslim Chhatra League general secretary Shafiar Rahman, also a candidate of matriculation examination, and Jubo League convenor Shamsul Haque on February 27. People again burst into protest. Awami Muslim League and Muslim Chhatra League at a joint meeting decided to observe an all-out strike in the town on February 28.

However, Khairat Hossain was released from Dhaka Central Jail after two years of imprisonment, while Dabiruddin Ahmed and Abu Nazem Mohammad Ali were released from Rangpur jail after six months’ imprisonment. Shafiar Rahman and Shamsul Haque were also released eventually. Shafiar appeared in the matriculation examination from jail. Finally, Pakistani rulers bowed down to the demands of the people of the then East Pakistan declaring Bangla as a state language.

The contributions of the two headmasters to the development of the language movement in this corner of the country deserve to be recorded in history with due importance. The contributions of the students, both boys and girls, of the two schools, their beloved headmasters and local politicians of the small northern town will be ever remembered. This is because of massive involvement of all, the Language Movement succeeded.

Language movement has played an important role in making Bengalis aware of their cultural and national heritage and ultimately led to creation of Bangladesh in 1971. After 1971, even today, the movement has been the guiding philosophy for any movement against oppression, injustice, disparity and denial of civic rights, and in the comprehension of the socio-economic emancipation of the people of Bangladesh.