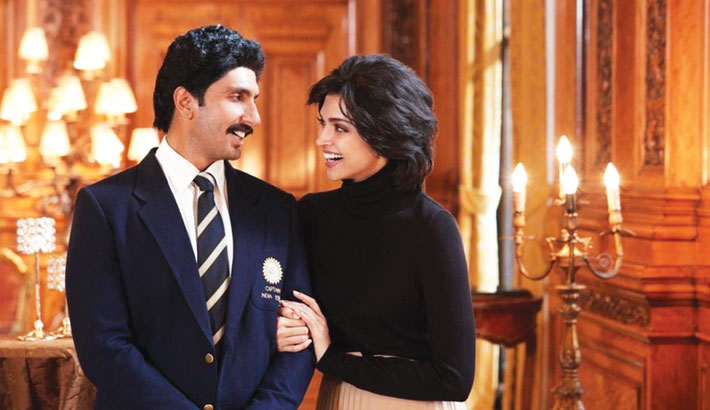 The first look of Deepika Padukone from Kabir Khan directorial '83 is out. The actor plays former Indian cricketer Kapil Dev’s wife Romi Dev. And, if the photo is anything to go by, Deepika has nailed the look, reports The Indian Express.

In the photo, shared by the makers, Deepika as Romi Dev and Ranveer as Kapil Dev stand beside each other smiling.

Sharing her experience of working in '83, Deepika wrote on Instagram, “To be able to play a small part in a film that captures one of the most iconic moments in sporting history has been an absolute honour. I’ve seen very closely the role a wife plays in the success of her husband’s professional and personal aspirations in my mother and '83 for me in many ways is an ode to every woman who puts her husband’s dream before her own.”

Ranveer also shared the photo on social media and described Deepika’s character as “The Wind beneath my Wings. The Heart of the Hurricane.”

He had earlier expressed his happiness about Deepika Padukone being a part of 83. He credited Kabir Khan for the ‘genius casting’. “Who better to play My Wifey than My Wifey?! @deepikapadukone plays Romi Dev in @83thefilm! Genius casting courtesy @kabirkhankk #83squad,” he wrote on Instagram.

Commenting on casting Deepika as Romi Dev, Kabir Khan said in a statement, “I have always thought of Deepika as a phenomenal actress and when I was thinking of casting for Romi Dev’s role, I could only think of Her. Romi has disarmingly charming and positive energy and Deepika has captured that with perfection.

Her easy chemistry with Ranveer will also greatly help in portraying the relationship that Kapil Dev and Romi share. I’m delighted that Deepika has been such an integral part of our journey for '83.”