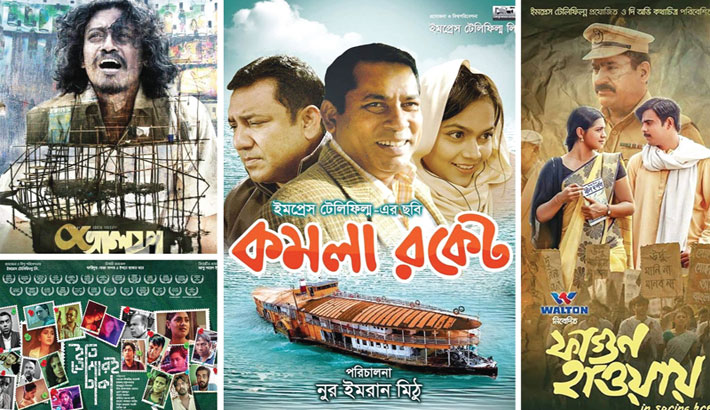 To mark the International Mother Language Day, Hyderabad Film Club and Federation of Film Society of India are jointly organising the festival.

The festival will be held February 21-24 at Sri Sarathi Studios in Hyderabad. The screening will begin at 06:00pm every day.

Tauquir Ahmed directed Fagun Haway (In Spring Breeze) is a Bangladeshi historical drama film based on the novel Bou Kotha Kou by Tito Rahman. Based on the 1952 Language Movement, the film depicts the story of a romance amidst the backdrop of a district town during the blazing days of February. ‘Fagun Haway’ brings a stellar cast to potray the story – Nusrat Imrose Tisha and Siam Ahmed are in the leading roles. The other cast of the film include veteran actors Abul Hayat, Yashpal Sharma (from India) , Fazlur Rahman Babu and Rownok Hasan.

Noor Imran Mithu’s directorial debut ‘Komola Rocket’ (The Orange Ship), a film based on the Bangla Academy Award winning writer Shahaduzzaman’s stories ‘Moulik’ and ‘Saipras’. The lead roles of ‘Komola Rocket’ are played by Tauquir Ahmed and Lux-Channel i Super Star contestant Samia Syed, while Mosharraf Karim is seen as an agent. The story of the film revolves around a steamer in the name of Rocket.

On the other hand, Iti, Tomari Dhaka (Sincerely Yours, Dhaka) is a 2018 Impress Telefilm drama film produced as Bangladesh’s first anthology film directed by eleven individual directors. It was filmed on location in Dhaka, Bangladesh. In this omnibus, 11 Bangladeshi filmmakers create a love letter to the city of Dhaka.

While, Alpha is a 2019 Bangladeshi film starring Alamgir Kabir, Doyel Mash and ATM Shamsuzzaman in lead roles. It is the third direction of Nasiruddin Yousuff.

The story of the movie based on the life of a 40 year old painter, who lives in a wooden and bamboo house on stilts in the middle of a polluted lake on the outskirts of Dhaka City. Alpha’s house serves as his painting. Dogs, roosters and birds also share the space with him. There are many moments when he feels an oneness with nature and with the birds and animals that surround him.