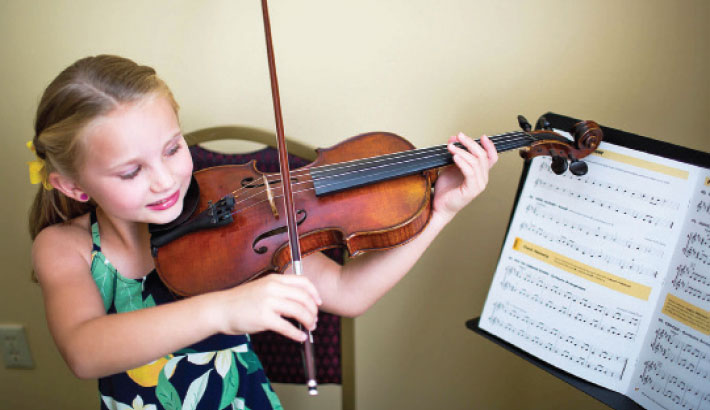 Benefit the brains of babies: McMaster University performed a study in which one-year-old babies participated in interactive music classes. These classes entailed activities such as learning to sing specific songs and playing percussion instruments with their parents. They found that the babies who participated in the interactive music classes smiled more often, could communicate better, were less distressed, responded more favorably to music that was tonal and consonant (as opposed to atonal and dissonant music) and had more advanced brain responses to tones of music.

Speed up reaction time: At the Université de Montréal in Canada, Dr. Simon Landry led a study comparing the reaction times of musicians who had at least 7 years of training with non-musicians. Dr. Simon had the participating students place one hand on a mouse, the other on a vibrotactile device, and placed a speaker in front of them. If the students felt a vibration from the vibrotactile device, or heard a sound from the speaker, or sensed both happening at the same time, they were instructed to click the mouse. The results demonstrated that the musicians had significantly faster reaction times in all three ways they were stimulated.

Build confidence: Playing an instrument helps you get comfortable with self-expression. As children begin to master their instrument, they will probably end up playing to a few audiences, starting with their music teacher or parents, and branching out to groups of other pupils and concert audiences. Playing in public can help children feel confident in presenting their work in a non-academic context.

Improve memory capability: Researchers have found that learning to play a musical instrument can enhance verbal memory, spatial reasoning and literacy skills. Playing an instrument makes you use both sides of your brain, which strengthens memory power. Way back in 2003, ABC Science included a study conducted among school students, half of whom had been musically trained, and half who had not. The test involved reading a list of words to the students and asking them to recall the words after a space of time had elapsed. The study found that the boys who had been musically trained had a significantly better verbal memory than the boys who had not.

Make you more creative: Practising and perfecting a piece of music does wonders for the creative side of your brain. No matter how much a composer annotates their composition, they cannot fully express how a piece of music should be played. So it is up to the player to put their own stamp on a piece, to inject some of their personality into the music. There is a reason classical artists win awards for their performances.

Strengthen immune system: While investigating the effects of music, physiologists Daniel J. Levitin and Mona Lisa Chanda found that listening to music and playing an instrument increased the immune system. These activities lead to the manufacturing of the antibody immunoglobulin-A: natural killer cell, which kills viruses. If you start to feel under the weather, just pick up that guitar and start playing!

Amplify time-management skills: No one can effectively learn to play an instrument overnight. Making music requires work and a consistent investment of time and effort. Adding learning an instrument into an already busy schedule can be challenging, especially if you want to become an advanced player. As they say, practice makes perfect. Discipline is necessary to go through the process of consistent, focused practice. The desire to get better will help you to schedule in practice during your already busy day. You also learn the life skill of how to waste less time and to use your time wisely. This discipline can carry over into other aspects of your life, elevating the quality of the life you live.

Improve social life: Playing an instrument is not only good for your brain rather it is great for expanding your social circle. Joining a musical group at any age encourages you to develop relationships with new kinds of people. It also builds skills in leadership and team-building, as well as showing you the rewards of working with others.