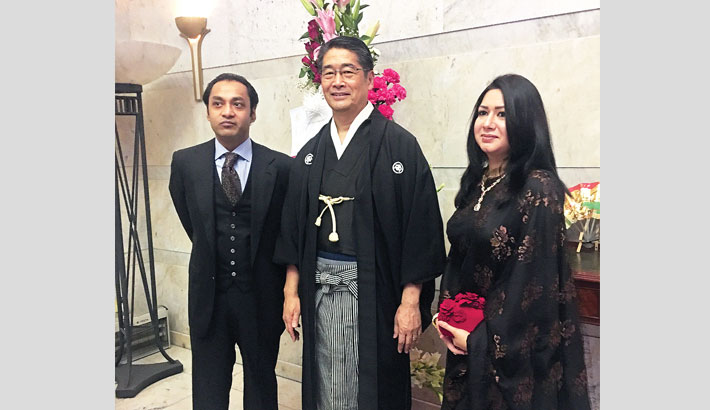 Bashundhara Group Managing Director Sayem Sobhan Anvir and Director Sabrina Sobhan pose for photograph with Ambassador of Japan Ito Naoki at a reception in his Baridhara residence in the capital on Tuesday.

Embassy of Japan in Bangladesh on Tuesday hosted a reception on the occasion of the birthday of Japanese Emperor Naruhito.

The reception was attended by a number of high-profile guests, including Planning Minister MA Mannan, ambassadors and high commissioners of different foreign diplomatic missions in Dhaka, high civil and military officials and members of economic, academic, business and journalist communities.

Bashundhara Group Managing Director Sayem Sobhan Anvir and Director Sabrina Sobhan attended the reception held in the residence of the Japanese Ambassador in the capital.

On their arrival, Sayem Sobhan Anvir and Sabrina Sobhan were warmly welcomed by Japanese Ambassador Ito Naoki. They exchanged pleasantries and good wishes.

The Managing Director also conveyed his wishes to the Japanese Emperor through the Ambassador.

The programme began with the playing of the  national anthems of Bangladesh and Japan.

In his speech, Mannan highlighted Japan-Bangladesh relations and Japanese contributions to the development of Bangladesh since the independence of the country.

Welcoming the guests, the Japanese Ambassador also highlighted the bilateral ties between the two friendly countries.