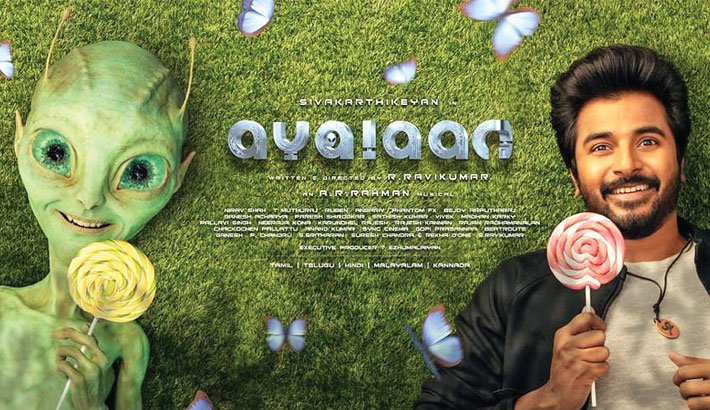 As a double treat for fans on the occasion of Sivakarthikeyan’s birthday, the first look of Ayalaan (which means Alien) was unveiled on Tuesday. The actor took to his official Twitter handle to share the poster.

Tamil sci-fi film Ayalaan is being helmed by director R. Ravikumar of Indru Netru Naalai fame. The poster shows a smiling Sivakarthikeyan, holding a lollipop and hanging out with his “new friend”, an alien. The whole vibe of the poster is a happy one as the backdrop also includes a green field and butterflies.

Apart from Sivakarthikeyan, Ayalaan also stars Rakul Preet Singh, Isha Koppikar, Sharad Kelkar, Yogi Babu and Karunakaran among others in pivotal roles. Interestingly, AR Rahman has been roped in to compose the music for the film. It is the first collaboration of Sivakarthikeyan and the music maestro.

Bankrolled by KJR Studios and 24 AM Studios, Ayalaan will be releasing in five languages – Tamil, Telugu, Hindi, Kannada and Malayalam.

The first look of Sivakarthikeyan’s upcoming film Doctor was also unveiled today. The two posters are starkly different from each other and fans are excited as it shows that Sivakarthikeyan is choosing a wide range of projects.