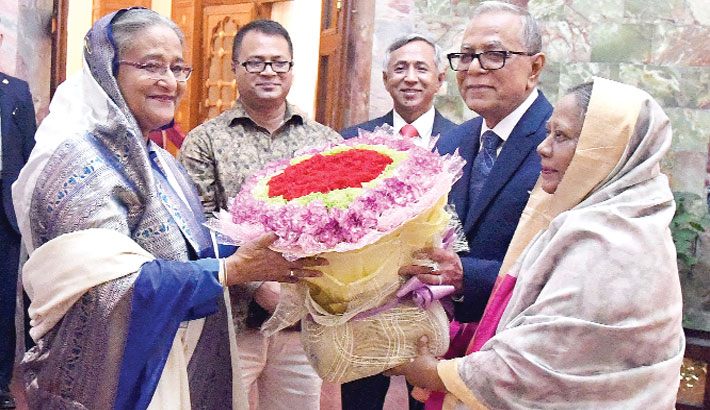 President Abdul Hamid receives Prime Minister Sheikh Hasina with a bouquet at Bangabhaban in the capital on Monday. The president’s wife Rashida Khanom was present.

Terming the members of parliament as a bridge between people and the government, President Abdul Hamid on Monday urged them to stand by people when needed, reports UNB.

The president was addressing a dinner party followed by a cultural programme arranged in honour of Prime Minister Sheikh Hasina, Jatiya Sangsad Speaker Dr Shirin Sharmin Chaudhury, cabinet members and members of parliament at Bangabhaban. People’s relations and communication with the party and the government will be established on a solid basis if you can do it, said the President.

Hamid said the morethe relationship between the MPs and people will be stronger and firmer, the more the development and democracy will be sustainable.

Recalling the former MPs who played an important role in attaining development and strengthening democracy, Hamid, a former Speaker and lawmaker, said he started his journey in Parliament with Legislative Assembly in 1972 and ended it in the month of March in 2013.

“Often the mind wants to go to Parliament and watch its activities and spend time with you. But thinking about the sufferings of people, it’s not possible for me despite having willingness. Even though I’m not in parliament I regularly watch parliamentary activities on television,” he said.

He said people voted you to make you their representatives with much expectation.”So, your main responsibility is to make every effort to fulfill the aspirations of people,” Hamid added.