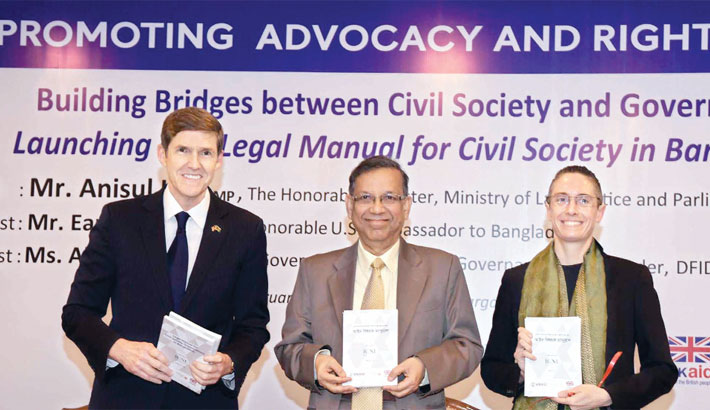 Law, Justice and Parliamentary Affairs Minister Anisul Huq along with US Ambassador Earl R Miller and senior governance adviser of DFID in Bangladesh Aislin Baker holds the copy of a book on legal manual for civil society agencies of the country at a function in the city on Sunday. —SUN PHOTO

Law Minister Anisul Huq on Sunday said the government will consider the issue of BNP chairperson Khaleda Zia’s parole only if she appeals for it following all rules and procedures.

“There are specific laws on how to apply and how to free a convict on parole,” he said. Anisul made the remarks while talking to journalists at a programme marking the launch of ‘legal manual for civil society in Bangladesh’ organized by International Center for Not-For-Profit Law (ICNL) at hotel Sonargaon in the capital.

The minister said, “Civil society is more active in influencing the state for reforms of the law and justice system. It is also the responsibility of the civil society to build a civic mindset among common people.”

He said civil society will point out concerns, priorities and privileges of the citizens before the government like in other countries and the state will also welcome it.  “But sometimes we notice that members of the civil society stand against state activities as partners of any political party or international organization, which is affecting the glorious past of our civil society,” he added

“Despite these weaknesses, we hope that the civil society in Bangladesh will play an important role in protecting the rights of the people.” He also urged everyone to take the country forward for a better future.