Riyad out, Mushy in 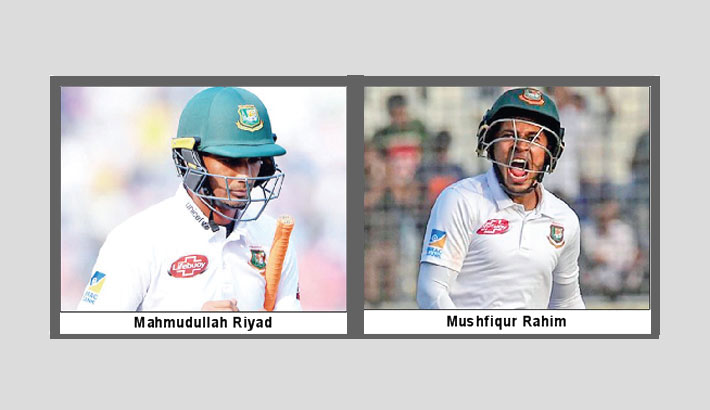 Bangladesh dropped batsman Mahmudullah Riyad from the Test squad for the one-off Test against Zimbabwe, scheduled to be held in the capital from February 22 to February 26.

Mushfiqur Rahim has returned to Bangladesh squad for the one-off Test against Zimbabwe. Rahim, who had opted out of the Pakistan tour due to security reasons, is part of the 16-man squad announced by Bangladesh Cricket Board (BCB) on Sunday.

Tigers Head coach Russell Domingo also had emphasised the need for continuity in terms of selection. Although he admitted that Rahim had to be considered as he was Bangladesh’s best player in India.

Meanwhile, as reported earlier, Mahmudullah has been asked to focus on the limited-overs formats while sidelining himself from the Test side.

In his last ten Test innings, Mahmudullah has scored only one half century, an innings of 67 runs against New Zealand in Wellington in March 2019.

Mehedi Hasan Miraz and Mustafizur Rahman also found their place in the squad along with Taskin Ahmed, who last played a Test in 2017. The selectors have also handed maiden call-ups to middle-order batsman Yasir Ali and medium pacer Hasan Mahmud.

“I believe we have selected the best possible Test squad under present circumstances. There is a very nice blend of experience and potential,” Abedin said.

“It is unfortunate that some players had to miss out but our priority has been to ensure balance and continuity. We felt that Mahmudullah needed a break from the red ball. Al-Amin has niggles and that’s why we thought he should be given the time to be fully ready for the limited-over matches where he is more important. Rubel is not part of our red ball plans for the moment. Soumya had applied for a leave and therefore has not been considered. We think Hasan Mahmud and Yasir Ali Chowdhury have tremendous potential and they are very much part of our future plans,” told Nannu. However, Bangladesh Chief Selector Abedin could not justify the inconsistency in the selection policy in regards to their pace bowlers Mustafizur Rahman, Al Amin Hossain and Rubel Hossain.

The decision to reduce the sixteen-member squad to thirteen members ahead of the Test series against Zimbabwe was a clear indication that selectors were not sure about their plan of action.

A 16-member squad will start preparing from February 18. Then the management will decide the 11 players who will play and then the 13-man squad will be announced as the rest will join Bangladesh Cricket League.

Ahead of the Pakistan Test series, Bangladesh Head Coach Russell Domingo insisted that Mustafizur needs some work on his technicality before returning to Test cricket.

After just performing in one game in BCL, Mustafizur returned to squad and Abedin said that considering Mustafizur for white ball cricket only was not the decision of selection panel rather it was a personal observation of the coach.

“The management will definitely give some inputs about them. He didn’t watch enough matches at domestic level. We have seen him bowling in two BCL matches and he is bowling like he used to bowl before,” he said.

“Al-Amin got injured during the Pakistan series. But the injury is not too serious but he is suffering. It would be difficult for him to continue bowling in longer version. He is not even playing the BCL match, which he was supposed to play,” said Nannu.

“He could not recover. If the player doesn’t have the fitness to bowl in a longer version cricket, in that case, we should not take the risk,” he said.

“If you can’t bowl after a couple of overs then it’s difficult to continue with four bowlers in a longer version match. So we kept him only for ODI,” told  It was learnt that Al Amin had asked for leave from the BCL match due to the pain in his sheen bone and team phyisio readily accepted it and informed it to the management.

It is understood that Russell Domingo on Tuesday had insisted that Al Amin should concentrate on white ball cricket as they are not thinking about him in the longer format cricket at the moment when he came to bowl in the nets to show that he is fit and raring to go for the one-off Test series against Zimbabwe.

Abedin insisted that they did not have any long term plans about Rubel Hossain and he was included as a back-up bowler though he played in the last Test against Pakistan.

“This is not a change. We took him as back-up bowler. We also took him to Pakistan as back-up for Al-Amin and he was included after Al Amin got injured. We have discussed this with our team management. They want him to return after being fully fit. Because we are playing against Zimbabwe at home, pacers won’t have that much dominance. We will have a plan about how many pace bowlers we will field in that match. Management also wants to see that. So, we have included some new players like Hasan Mahmud,” he said adding that they have taken more pace bowlers as management wants to prepare for the Pakistan Test.

“We want to include more pace bowlers because the management wants to prepare some new pace bowlers. We have a Test match coming up in Pakistan so we can also take preparation for that by bringing in the pacers. We will be busy after playing this Test with one-dayers and T20Is. We won’t have much opportunity for training. We will try to work on Test in whatever time we get,” told Nannu

After starting their tour with a two-day warm-up game against BCB XI, Zimbabwe will play the only Test starting from February 22. The two sides will then play three ODIs and two T20Is from March 1.