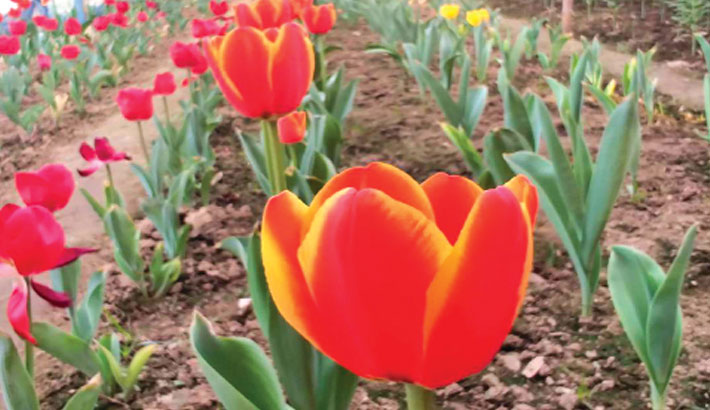 GAZIPUR: Tulip, the spring-blooming ornamental flower famous for its dazzling beauty that usually grows in colder countries, is now laregly being cultivated commercially in Gazipur.

Tulip, the national flower of Turkey and the Netherlands, grows from bulbs. Most tulips thrive in colder winters because of the long-chilling requirement for bulbs.

Delwar Hossain, 50, a farmer of Kewa village in Sreepur upazila, is cultivating the attractive flower in his garden which he named ‘Moumita Flowers’.

After his success in cultivating Gerbera, China Rose and different other foreign species of flower over the last 10-12 years, Delwar has farmed Tulip this time, which has created new potentials in the flower business, according to officials at the Department of Agricultural Extension (DAE).

As the news of his Tulip cultivation spread around, flower lovers and entrepreneurs from different areas are thronging his garden every day, said a caretaker of the garden.

Talking to the agency, Delwar said he brought 1,000 Tulip bulbs from the Netherlands and planted those in his garden six months back on an experiment basis. Though it is a flower of cold countries, there is also demand for this flower in Bangladesh.

“If anyone wants to cultivate this flower, I’ll provide all sorts of assistance, including supply of Tulip bulbs,” he said.

Mahbubur Rahman, deputy director at the DAE Gazipur office, said it is heard that many flower lovers grow Tulip in tubs but for the first time, Delwar has cultivated it commercially.

“We’re ready to provide all types of assistance to him. There’ll be huge commercial and economic potential if the flower is cultivated in this country,” he said.

Per 100 pieces of Tulip brought from abroad are sold here for Tk 700-800, Delwar said, adding that one could make profit by selling per 100 pieces for Tk 400-500 if the flower is cultivated in the country.

Delwar who gained success in cultivating Gerbera, Tuberose and China Rose earlier received the “Bangabandhu Krishi Medal” as a successful flower farmer in 2017.

Along with creating employment for 30 people in his garden, he is earning Tk 40 lakh every year, the entrepreneur said.

He said there is a huge demand for Tulip flower across the globe.

The local demand is currently being met importing flower from the Netherlands, China, India and other countries, Delwar said, adding that initiatives could be taken to cultivate the flower in northern districts considering low temperature there in the winter season.