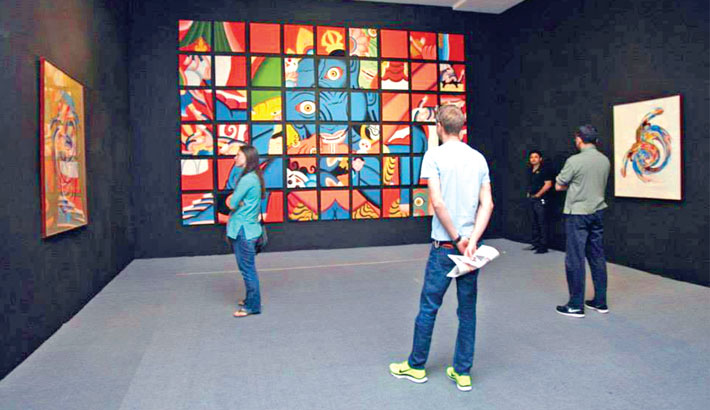 The artistic extravaganza, organised by Samdani Art Foundation (SAF) in association with the Ministry of Cultural Affairs and Bangladesh Shilpakala Academy (BSA), has enthralled the visitors since its opening on February 7.

Having quickly established its place in the art calendar of the region, the brainchild of SAF Co-founders Rajeeb and Nadia Samdani, curated by the summit’s Chief Curator Diana Campbell Betancourt- the 5th summit empowered the art-lovers to explore various forms of art from all around the world under one roof.

More than 500 artists, sculptors, curators, critics, collectors, architects and art professionals from over 44 different countries participated in this rendezvous of modern and contemporary art. Forged through alliances across Africa, Australia, South and Southeast Asia, and also extending into Europe and the US, the extravagant event also featured thought-provoking performance arts, videos, panel discussions, symposia, puppet shows and more.

According to Nadia Samdani, this year’s summit theme has been ‘Seismic Movements’ where different artworks related to geological movements, colonial movements, independence movement, social movements had been on display and enthralled the visitors, throughout the summit. Also, DAS – 2020 had been ‘plastic-free’ and no air-conditioning was used in the summit.

A very special exhibition titled ‘Lighting the Fire of Freedom’, an initiative of the Centre for Research and Information (CRI), ICT Division, in collaboration with BSA and the Ministry of Cultural Affairs, paved tribute to the Father of the Nation, Bangabandhu Sheikh Mujibur Rahman on his birth centenary. Curated by Ruxmini Reckvana Q Choudhury, Assistant Curator of SAF- the exhibition narrated the journey of Bangabandhu (1920 – 1975), chronologically; through a rich variety of archival and contemporary materials including personal photographs, newspapers, videos and artworks. The exhibition treasures historic moments, dating back to the Bengal Presidency under British Raj, the East Pakistan regime, and finally Bangladesh.

The 5th edition of the Samdani Art Award curated by Philippe Pirotte and in partnership with the Goethe-Institut of Dhaka, provided artists the opportunity to create new work for DAS 2020 and to be supported in a residency at Srihatta. Soma Surovi Jannat received the Samdani Art Award this year, for her work “Into the Yarn, Out in the One” (pen on plywood, wood and wall, 2019-2020).

The other shortlisted artists were: Ariful Kabir, Ashfika Rahman, Faiham Ebna Sharif, Habiba Nowrose, Najmun Nahar Keya, Palash Bhattacharjee, Sounak Das, Sumana Akter, Tahia Farhin Haque, and Zihan Karim. Breaking the convention, Promiti Hossain was respected with a special mention award for her work “Personal and Social” (2019-2020), facilitated by the Jury Board from their honorariums of the summit.

‘Roots’, curated by Dhaka based artist and educator Bishwajit Goswami, examined the transfer of knowledge by art educators who have been influential in the building of Bangladesh’s art history. The exhibition focused on the role of Bangladeshi artists in building the institutions that support artistic production in the country, from founding formal institutions like art schools (such as Zainul Abedin with the Faculty of Fine Arts, University of Dhaka and Rashid Choudhury with the Institute of Fine Arts, University of Chittagong) to informal art education outside of the capital (SM Sultan’s Shishu Swarga and Charupith Jashore).

The 6th edition of Dhaka Art Summit is scheduled to lift its curtain on 2022.