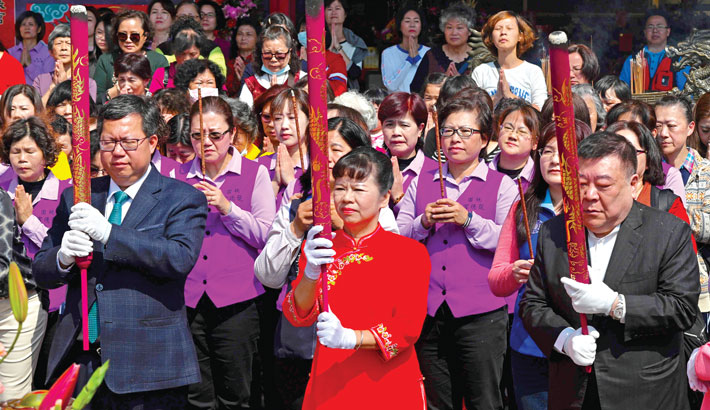 Taoyuan mayor Cheng Wen-tsan (L) takes part in a Taoist ceremony to prevent the COVID-Coronavirus at the Longde temple in Taoyuan on Saturday. —AFP PHOTO

MANILA: In a popular Catholic church in the Philippines, nearly half of the pews were empty for Sunday Mass. The few hundred worshippers who showed up were asked to refrain from shaking others’ hands or holding them during prayers to prevent the spread of the virus that started in China, reports AP.

In Hong Kong, Cardinal John Hon Tong, wearing a mask, announced the suspension of public Masses for two weeks and urged churchgoers to instead watch them online.

Buddhist temples, Christian churches and Muslim mosques have been ordered closed since Jan. 29 in mainland China, where the new coronavirus strain was first detected in the central city of Wuhan, the epicenter of the outbreak. Mosques have canceled weekly Friday prayers since January under an order to avoid “collective religious activities.”

Religious leaders should encourage Muslims to “trust the party” and avoid crowds, the Communist Party-controlled body that oversees China’s officially authorized mosques said in a statement.

The restrictions and dwindling crowds in religiously diverse places of worship underscore the extent of the scare over the outbreak that has permeated many aspects of life in the hard-hit Asian region. The virus has killed more than 1,500 people and infected more than 67,000 others, mostly in China, where several cities that are home to more than 60 million people have been placed under lockdown in an unprecedented effort to contain the disease.

All but three of the deaths have been in China. Japan, Hong Kong and the Philippines have reported one fatality each.

In Japan, where Buddhist temples and Shinto shrines are tourist destinations, a sharp decline in the number of foreign visitors has been a palpable setback. At normally popular Suzumushi, or Crickets, temple, a sign read, “Due to the impact of the COVID-19, no waiting expected,” using the name given to the disease by the World Health Organization.

“We assimilate with parishioners and many other people. We know that the talk of the town is really this virus and it’s obvious that many are scared,” said the Rev. Siegfred Arellano, a priest at the Binondo church in the Philippine capital’s Chinatown.

After consulting health experts, the Catholic Bishops Conference of the Philippines announced steps late last month to fight the virus. Churchgoers were advised to avoid hand contact and receive the Eucharist, which symbolizes the body of Jesus Christ, in the hand instead of the mouth.

They said holy water should be replaced more often in church stoups and a protective cloth installed on the grills separating priests and worshippers in confessional boxes.

In Hong Kong, Tong initially approved precautions that included a choice for churchgoers to watch Sunday Mass online. Those who opted to go to churches were asked to wear masks and told that “singing is suspended,” except for short hymns like “Allelulia.” The new virus is spread through respiratory droplets, according to health officials.