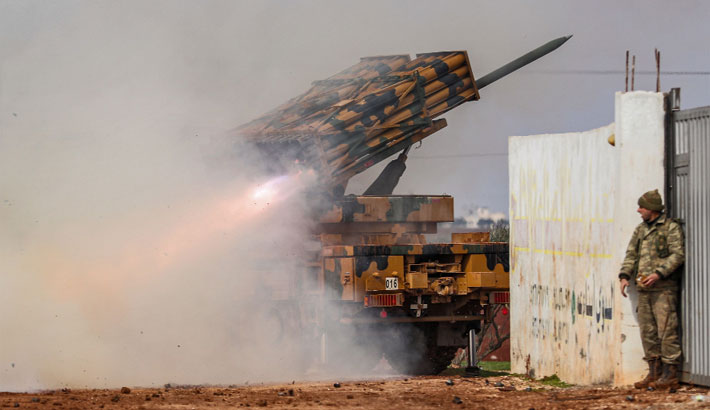 Syrian government and allied forces, which have kept up a blistering assault on the Idlib region since December, are now securing areas along a key highway they seized from jihadists and allied rebels this week.

On Friday, they pushed west of the M5 motorway which connects Syria’s four largest cities and is economically vital for the government, the Syrian Observatory for Human Rights said.

In an attempt to consolidate a “security belt” around the road, they seized a key base on Friday that they had lost to rebels in 2012, the Britain-based monitor said.

Located 12 kilometres (seven miles) west of Aleppo city, Base 46 was the site of a brutal confrontation between government forces and rebels in the early phase of Syria’s civil war.

The Observatory estimates that more than 150 Damascus loyalists lost their lives during the rebel takeover of the base at the end of 2012.

Its recapture marks a symbolic win for the government which has reduced the rebel-held pocket to just over half of Idlib province, as well as slivers of neighbouring Aleppo and Latakia.

The Russian-backed offensive has triggered the largest wave of displacement in the nine-year conflict, with 800,000 people fleeing since December, according to the United Nations.

Among the displaced, some 82,000 people are sleeping rough in sub-zero temperatures.

The unprecedented exodus has sparked alarm in neighbouring Turkey which fears an influx across its border.

Ankara, which has troops deployed in several locations in northern Syria, continues to support rebel groups battling government troops or acting as proxies against Kurdish forces.

It has sent reinforcements to the northwest in recent weeks to contain the latest push by Damascus, leading to a series of tit-for-tat exchanges between their forces.

The deadly clashes, the latest of which saw government shelling kill five Turkish troops this week, are the most serious since Ankara first sent forces to Syria in 2016.

Base 46 was among the positions where Turkish troops have recently deployed but they pulled out of the area late Thursday, making way for the government takeover, the Observatory said.

With Base 46 recaptured, government forces are now within two kilometres (little more than a mile) of the town of Urum al-Kubra and five kilometres (three miles) from the deserted town of Atareb, according to the monitor.

The shrinking rebel pocket is home to some three million people, nearly half of whom have already been displaced from other parts of the country.

It is dominated by jihadists of the Hayat Tahrir al-Sham alliance and their rebel allies.