Disha has a Valentine’s Day gift for Tiger’s mom 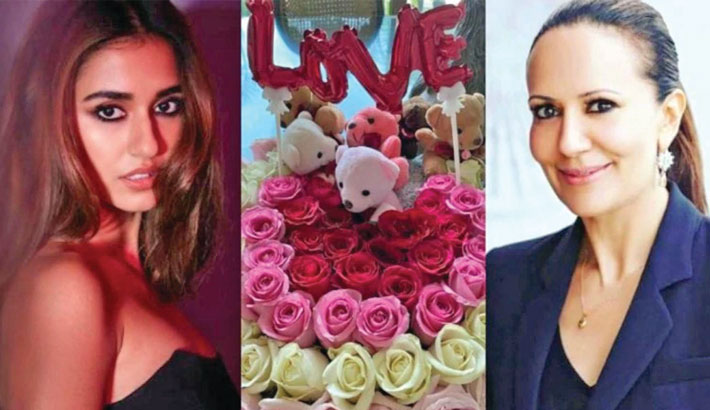 Tiger Shroff's mother Ayesha Shroff received a special bouquet of flowers from Disha Patani on Valentine's Day. Ayesha took to social media to share a picture of the flowers she received on the day of love, reports India Today.

The bouquet features a collection of pink, red and yellow roses arranged in a heart shape. It also contains several teddy bears and a metallic red foil toy balloon that reads "Love."

Disha commented, "Love you aunty." Apart from Ayesha Shroff, Disha Patani shares a close bond with Tiger's sister Krishna Shroff. Both of them are often seen commenting on each other’s Instagram posts. Ayesha and Krishna have also been spotted with Disha on various outings.

While Tiger and Disha are often spotted together on lunch and dinner dates, they have always maintained that they are "just good friends." At the India Today Mind Rocks 2018, Tiger Shroff opened up about his relationship with his Baaghi 2 co-star.

He said, "We can be friends also na? There is more. We are very good friends. She is just... she is very inspiring and hardworking. She doesn't take the good looks and talent to her head. Even after her success, she hasn't changed."

Disha, on the other hand, jokingly said in May 2019, "I have been trying to impress him."

Talking to an entertainment portal, she said, "I’ve been trying for so long, it’s been so many years and I’ve been trying to impress him. Now I’ve done this film Bharat where I’m doing all these stunts and I thought maybe he’ll get impressed but no luck. Yeah, we go to eat but that doesn’t mean he’s impressed, not like that like the crush impressed; but he likes everybody’s pictures like that. You must speak to him the next time. He’s shy and I’m shy so nobody’s breaking the ice."

Tiger Shroff and Disha Patani have worked together in Baaghi 2 and a music video titled Befikra. They will again be seen sharing screen space in a special song in Tiger's upcoming film Baaghi 3.