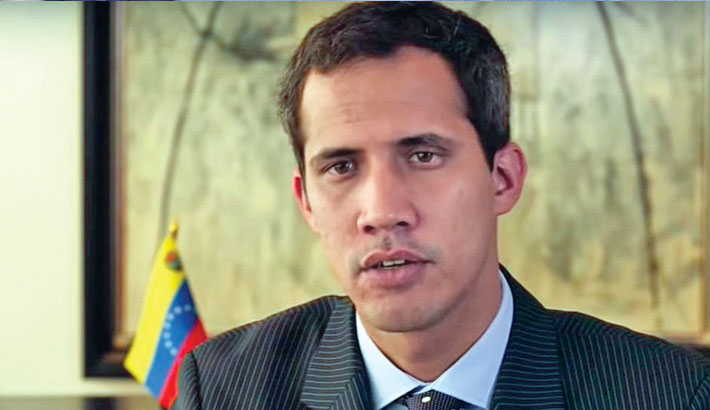 Guaido returned on Tuesday from a three-week international tour that took him to the US, Canada, Colombia and Europe. He was met by some angry Conviasa workers enraged that last Friday the US placed sanctions on the state airline company.

The US action criminalizing transactions with the flag carrier is the latest of many sanctions by Washington aimed at toppling leftist President Nicolas Maduro’s regime, particularly by cutting his government’s oil revenue. One protester appeared to douse Guaido with a fizzy drink. But speaking to journalists after a legislative session held in a Caracas plaza, the National Assembly speaker defended the use of sanctions.

He said they are “the free world’s tools to confront regimes (that) violate human rights, torturers and murderers.” He said the sanctions imposed on the top officials in Maduro’s government were an “effective” form of pressure. Guaido’s uncle Juan Marquez, who vanished after flying back with him, had been arrested, top Maduro ally Diosdado Cabello said, accusing him of smuggling explosives.

On his state television programme, Cabello said Marquez was detained for allegedly carrying C-4 explosives hidden inside flashlights and perfume refills, and was wearing a bulletproof vest.

Guaido had denounced the “disappearance” of his uncle at the airport and said he would hold Maduro responsible for whatever happened to him.

- ‘More sanctions for criminals’ - Maduro retains the support of Venezuela’s powerful military and has resisted Guaido’s challenge, even as the United States ramps up the pressure.