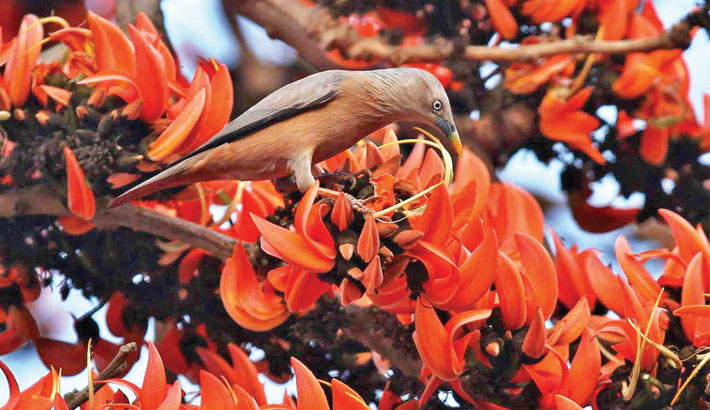 The blossoming Palash (flame of the forest) heralds the advent of spring, the king of all seasons. The photo taken on Thursday shows a perching bird on a branch of Palash tree in Curzon Hall area on the Dhaka University campus. – Reaz Ahmed Sumon

“Valentine’s Day is love-note to the rest of the year. Graciously, it come at a perfect time to be savoured-that period of calm between winter commotion and spring enticement.”

That is how one poet described the time when Spring and Valentine arrive together in loud colours for the lovers. Love is red, blue or golden, but colourful and as if just to prove that the Valentine Day has come today with flowers in full bloom everywhere, especially for Bangladesh due to recent revision of the Bangla calendar.

In October last year, the government revised the Bangla calendar to match the national days with the Gregorian calendar.

Valentine day is being celebrated around the globe on February 14 every year and is gaining popularity day by day, especially among the younger generations. Present generation holds the festival in high regards and celebrates the day expressing love not just to valentine but also every dear ones.

“We have our very own contents on Spring in literature. However, it’s surprisingly surpluses with the celebration of western occasion of Valentine who never belonged to Bangladesh. However, from Rabindranath Tagore to modern poet Shamshur Rahman, all of them described the uniqueness and joy of Spring season in their literary works,” Prof Shamsuzzaman told the Daily Sun on Thursday.

He added that the revision of Bangla calendar changed several times in the last century, but  the recent changes came last year to adjust the national days with a historical view.

Prof. Shamsuzzaman said “young generation enjoy valentine day with fanfare due to the aggression of the foreign culture.”

Valentine's Day celebrations are relatively new in Bangladesh but media and commercial cultures have made it a hugely popular one.

For young lovebirds, particularly in the cities, the day is special for exchanging gifts, Valentine cards and flowers. Concerts have also become a favourite Valentine's Day event for young couples and bands performed in different venues of the capital.

With the advancement of technology, the Valentine's Day received extra flavour .The young generation is using Facebook, twitter and other social media to exchange greetings among them.

Rezwanur Rahman, to a young computer scientist, mentioned that the technology has brought new dimention to valentine’s day celebrations as the lovers can wish their dear one using different social media platform.

“Someone says that the technology never demoralize people from their emotion. However, through social media and other internet platforms bring new options to make the celebration of love colourful by sharing different photos, contents and emojies,” Rezwanur Rahman said.

Some post attractive cards to their beloved ones. Most of the status of young people expressed their feelings about their special ones. They engaged themselves in social media by publishing selfie or wefie with dear ones.

In the city, Dhaka University campus, Ramna Park, Hatirhjheel, Rabindra Sarabar of Dhanmondi are the main areas where people will throng to celebrate the day together with loving one. Youths meet each others with flowers and Valentine's Day cards.

To celebrate the spirit of Spring, EMK Center and Department of Dance of Dhaka University jointly organized the 'EMK Boshonto Abahon 1426' on Thursday at the Bottala, in front of the Arts Building of the university.

Prof Rezwana Chowdhury Bannya, Chairman of the Department of Dance, welcomed the guests , while DU Vice-Chancellor Prof Dr Md  Akhtaruzzaman spoke on the festivities. US Ambassador in Bangladesh Earl R Miller was the chief guest.

The occasion also brings a bonanza for the city's flower vendors as they made booming business to the mark the day. Usually they hike prices of flowers, especially red roses, as the buyers were mostly emotion-charged and the price hardly drives away lovers.

The history of Valentine's Day is unclear but the most common tale is that the name Valentine originated from the 3rd century Catholic priest Valentine.

During the period, Valentine defied the Roman emperor Claudius II, who had imposed a ban on marriage, and arranged nuptials for young lovers in secret. When his actions were discovered the emperor ordered that Valentine be put to death.