Emotions Poured Into An Exhibition 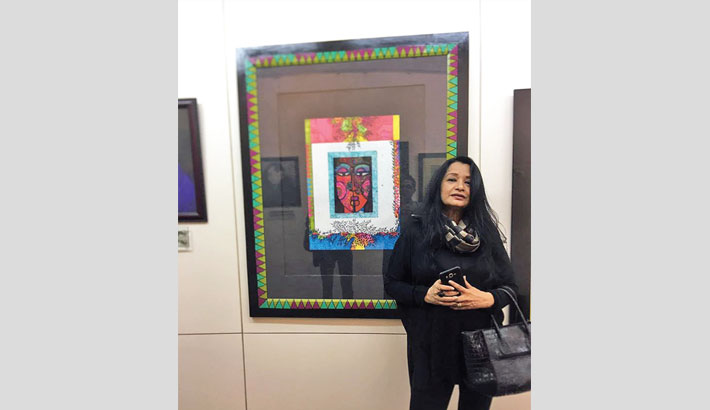 It is said that some artists transform as an individual and an artist as well while moving on in their lives, and later they pour those experiences and emotions into artworks. A fashionable lady in her own rights and an interior designer by profession, Rubina Akhter is one of those artists who has come up with something (artworks) for the art enthusiasts who look for something new and are in pursuit of a new way of conveying a message.

This journalist being a close friend of the artist has seen Rubina devoting hours, sometimes going without sleep, to these works which have been put on display at an exhibition titled ‘Mystery & Light’ underway at Radius Centre, Bay’s Galleria, Gulshan. Colourful as they are, each artwork has been done intricately with pen. One may wonder how long each of the works must have taken. The artist said, “Time was no constraint for me as I did my work whenever I felt like doing it. So, I took from two days to almost a week to complete each piece.” The artist has host a multitude of colours to articulate her thoughts. “The colours lurking inside me have been finally portrayed on the paper with pen. I have used nine colours --- black, red, green, blue, turquoise, magenta, yellow, orange and parrot green.”

Well, the artist believes that the colours used for her artworks are taken from what she saw in her village home in Feni, where she spent 18 months to rediscover herself. “I saw the beautiful colours in the village and the beauty of the women who work for long hours in the fields and at home too,” Rubina said.

Using delicate and detailed patterns juxtaposed with loosely outlined figures the artist has focused on lines, angles and colours having similarity with folk art and brought to life possibly from her days in the village. Some art collectors might also be drawn to the different kinds of frames used for her works because there is art ingrained on them very boldly. “The messages appear to be whimsical, yet possess the ability to make one reflect upon their own life and those around them,” one critic pointed out.

When asked about the dominant prevalence of women in her artworks the artist shared, “I grew up in a women-dominated family, and I was surrounded by the local women in the village. There I found beauty.” As far as her inspiration is concerned, ever-smiling Rubina is influenced by two of her most favourite artists, namely Klimt Gustav and Charles Mclead.

However, it is also true that her artworks are not frequently exhibited. She went on to say, “I am not desperate. I see things and cultivate them in my mind, and then put those thoughts on canvas or paper. Why should I make hurry as I am not running after money. Moreover I want my works to be full of quality.”

Rubina, 58, is a born artist and a fashionista as well. She has a Bachelor’s degree in Fine Arts and a diploma in fashion design from Thailand. Her exhibition is a bold attempt to present something new and is likely to impact younger ones in the trade. The artist is now planning to take her works to famous galleries located in England, the USA and France (the hub of creative minds).

(The writer is the Consulting Editor of the Daily Sun.)