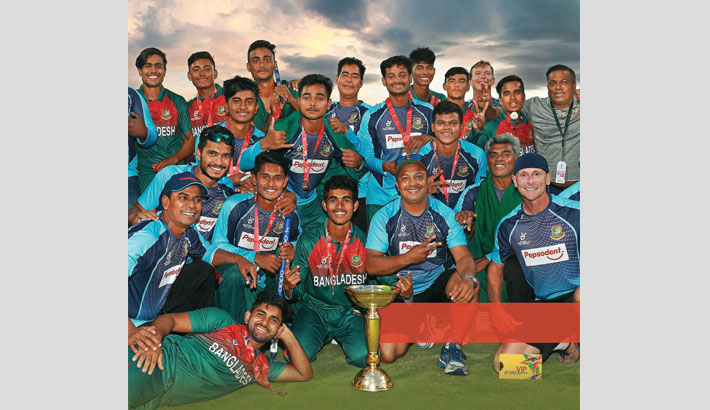 “And Bangladesh have done it! They will be dancing in the streets in Dhaka, Sylhet, Chattogram! Around the world! Captain fantastic Akbar Ali has seen it to be end by 3 wickets! They are the world champions of U-19 cricket!” This was how Ian Raphael Bishop, the Trinidadian cricket commentator and former cricketer who represented the West Indies cricket team, described the victory moment when Rakibul Hasan hit the winning run in the 2020 U-19 ICC World Cup final to clinch the maiden World Cup trophy for Bangladesh at Senwes Park, Potchefstroom on February 9. While visiting Bangladesh several times Ian Bishop saw the passion of the mass people of Bangladesh for cricket which helped him imagine what would happen in a cricket-loving nation after winning a grand trophy like the world cup. To win their first ever world cup at any level, Bangladesh outplayed India, the team which was predicted as the most favourite for becoming the champion. Bangladesh has become the seventh team to win the title in the 13th edition of U-19 world cup. Literally, these youths, led by Akbar Ali, have gifted the Tigers’ fans a huge occasion to celebrate ending their long wait for a major global trophy. 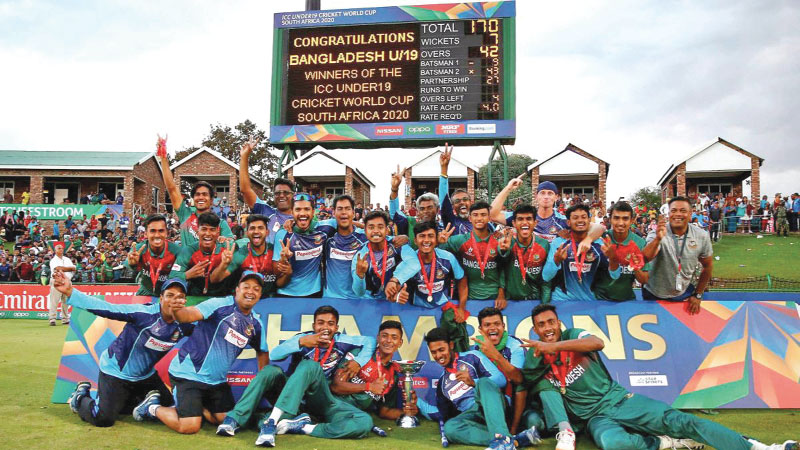 Before this edition of U-19 world cup, the biggest success of Tiger cricket at age level was securing third spot when Bangladesh hosted the tournament in 2016. Back then the junior team, led by Mehidy Hasan Miraz, was one of the top contenders of trophy, but they had to satisfy themselves with the third position after conceding a defeat against Windies, the champion team of that edition, in the semi final. That is why before starting for South Africa when captain Akbar Ali told the media that they had the ability to reach the final, many cricket fans, including some experts, did not take his words seriously despite the fact that his side had one of the highest winning rates last year. Though each of the edition of U-19 ICC world cup gifted Bangladesh some talented players like Mohammad Ashraful, Aftab Ahmed, Shahriar Nafees, Enamul Haque Jr., Shakib Al Hasan, Mushfiqur Rahim, Mominul Haque, Anamul Haque, Sabbir Rahman, Soumya Sarkar, Liton Kumar Das, Mustafizur Rahman, Taskin Ahmed, Abu Jayed Chowdhury and many more, still a team success was a far cry.

Finally that dream has come true this year. Bangladesh have played wonderful cricket throughout the competition. Cricket analysts warned other countries to keep close eyes on Tiger Cubs prior to the tournament. The level of consistency the team had shown on field was praised by most of the commentators and analysts who covered the tourney. The patience and maturity of the batsmen, flight and accuracy of the spinners and pace and aggression of the seamers were praiseworthy. And the determined efforts of the fielders highlighted their dedication to achieve their goal. Thus their outstanding victory over giant India was no surprise at all. Every match preview in the international media before the final pointed out their ability and how dangerous they could be. Many cricket analysts spoke about their temperament and the ability of perfect match reading to assert that why they were one of the top contenders for the trophy.

Young Tigers began the tournament in an exciting style. At the group stage, Bangladesh emerged, convincingly, on top with a nine-wicket victory against 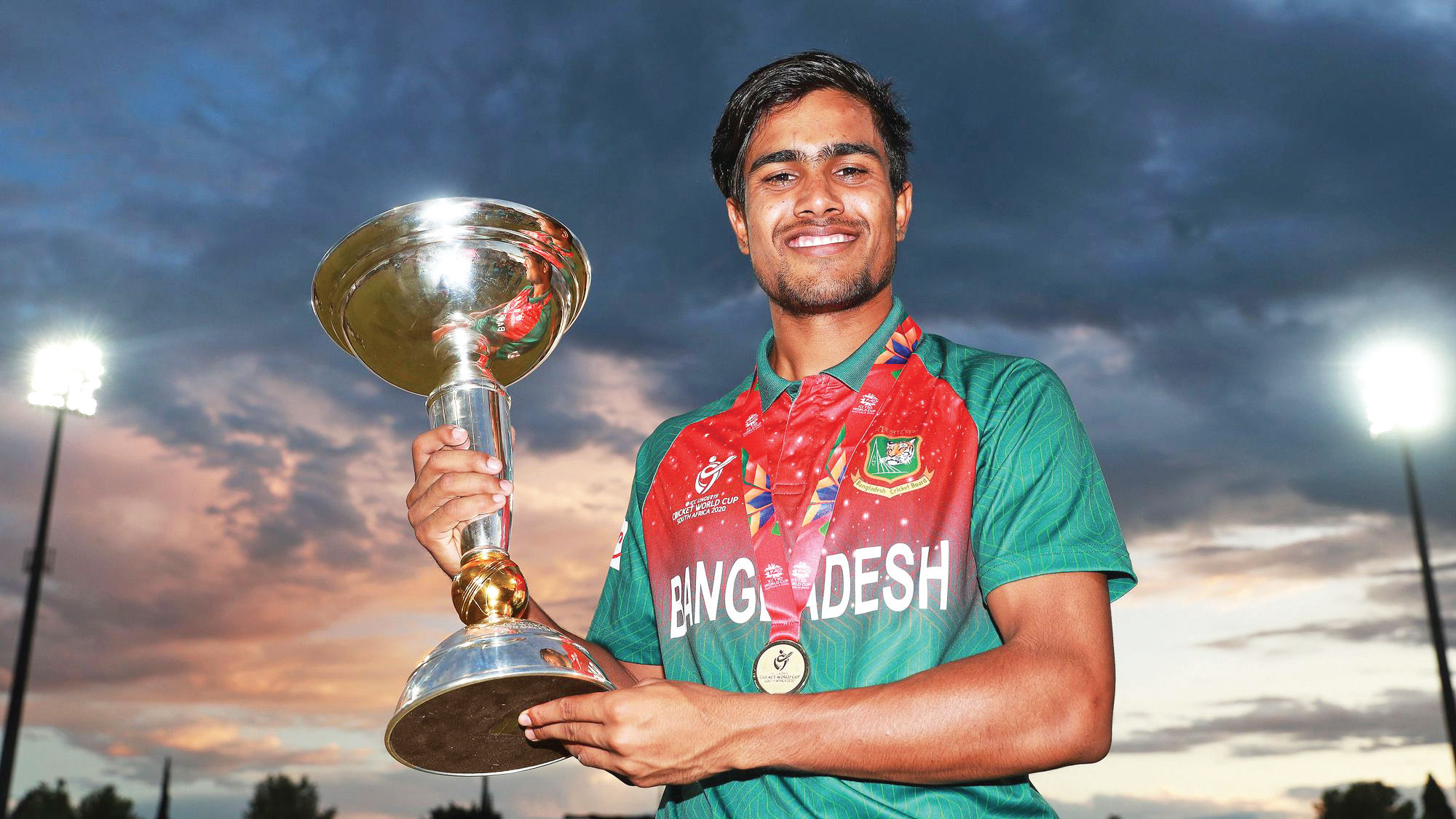 Zimbabwe in a rain-shortened game. The most crucial thing was each of their bowlers bagged a wicket apiece in that game to warm themselves up for the tournament. Against Scotland, Bangladesh were at their best. Packing the opposition out for 89 they chased the total comfortably. Parveez Hossain Emon was yet again impressive in that game with a mini-cameo after a half-century against Zimbabwe. In their final clash against Pakistan at the group stage, Bangladesh were lucky to escape with a point after rain lashed out when they were at a dire state losing 9 wickets for 106 runs. Many assumed after this match that top-order batting lineup was Bangladesh’s biggest strength. But as the tournament progressed, young Tigers showed their real character. In the quarter final against South Africa, Towhid Hridoy and Shahadat Hossain scored 51 and 74 (unbeaten) that showcased the strength of the middle order as well. And Rakibul’s five-wicket haul was a message for other teams as well. Against New Zealand, in the semi final, middle order of Bangladesh once again showed their ability alongside the top order batsman Mahmudul Hasan Joy’s century knock. And throughout the tournament bowlers have done their job quite perfectly. Thus the team got their desired success.

The most important fact is the spirit that the team has displayed throughout the tourney. The junior side exhibited their professionalism, and the team management also kept faith on their ability as they knew that this team could execute plan perfectly on the field. Thus when Bangladesh lost four crucial wickets within short intervals in the final, many started thinking that India would lift the trophy defeating them. However, the starving Tigers maintained cool head while executing their plans to exhaust all Indian bowlers until they were in full control to knock men in blues down. That is why without even having any of the players in the list of top five run scorers and wicket-takers this side has won the title. Bangladesh’s highest-run scorer of the tournament - Mahmudul Hasan Joy - finished at No. 15 on the list of highest run-scorers. But, importantly, No. 18 and No. 19 were also from Bangladesh - Tanzid Hasan Tamim and Shahadat Hossain respectively. Their highest wicket-taker, Rakibul Hossain, finished jointly securing the sixth position in the list of highest wicket-takers with twelve wickets, but Shoriful Islam’s nine, Tanzim Hasan Sakib’s seven and Shamim Hossain’s five wickets have proved that Bangladesh bowlers played as a unit. Moreover throughout the tournament Akbar Ali was fabulous as a captain. 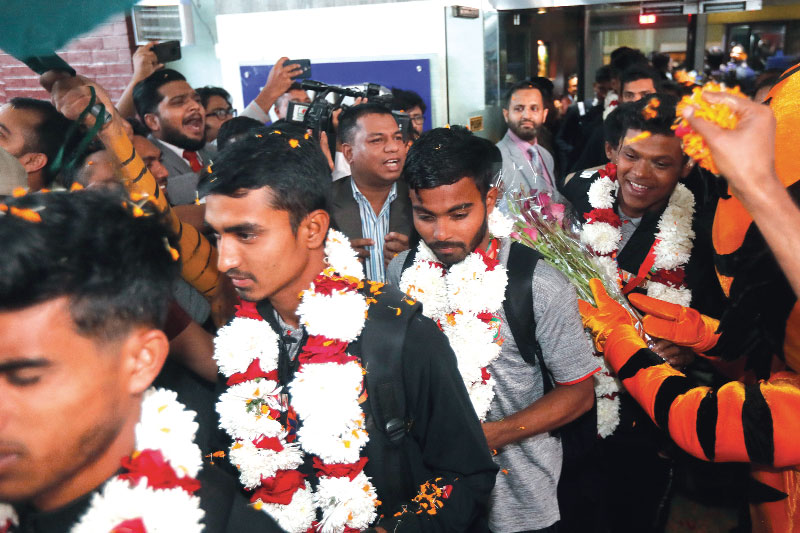 It is mentionable that the team spirit did not come all of a sudden rather it came through a process that was initiated two years ago. BCB began planning for U-19 ICC world cup 2020 just after completing their frustrating mission with 6th position in the previous edition of this tournament in 2018 held in New Zealand. As a group, the team came together in September 2018, when the board organized a camp to hand-pick those who would represent the country at the 2020 U-19 World Cup. Since then, Bangladesh played 30 youth ODIs, of which they won 18 matches which was the second-highest win percentage for teams that had played 15 or more games. During this time, Akbar’s team beat English youths thrice on their own soil and won series in Sri Lanka and New Zealand as well. All these success abroad boosted their confidence and helped them to be a team that can conquer anything.

Finally, ICC has picked three players --- Mahmudul Hasan Joy, Akbar Ali and Shahadat Hossain --- for their World Cup XI team and selected Akbar as the captain. It clearly tells about their specialty and supremacy which kept them ahead of the other players of same position. Besides, Shoriful Islam and Tanzim Hasan Sakib impressed analysts including Ian Bishop who wants national team bowlers to learn from them. In the end, we can only live in the moment and congratulate these young cubs for making the whole nation proud.