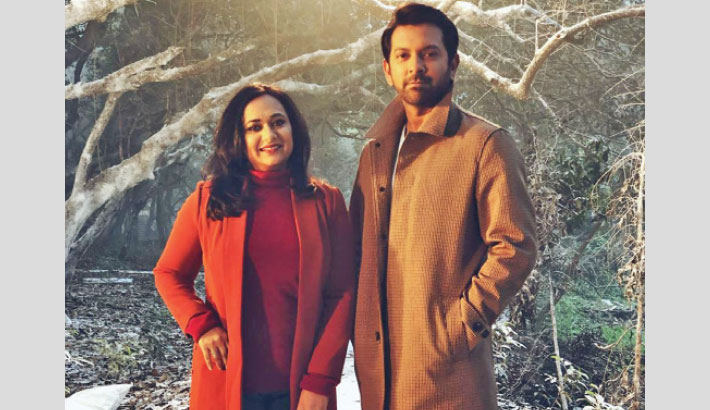 For Valentine’s Day this year, Shusmita Anis and Tahsan Khan have gifted music aficionados one of the most beautiful love songs ever. It is a song not just of love but of memories, dreams and waking up from those dreams. The song with its mellifluous rhythm and catchy tune is sure to melt your heart. The video starring Tanjin Tisha and Irfan Sajjad is equally enthralling. In just 2 days, the video has garnered 81,900 views!

The video begins with a sweet, old couple, reminiscing their younger days of how they fell in love, the day they got married and small yet significant details in their journey. This is something which we all can relate to. Yet, there is a twist in the ending which echoes the sad undertone in the song. The lyrics are such that they instantly have a connection with our hearts --- especially of those with love unrequited or lost. Lyrics were composed by Tahsan and Mehedi Hasan Limon. The music producer was Menon Khan. The director of the music video was Nahiyan Ahmed while the cinematographer was Sumon Sarker. The music video was launched officially on February 8 at Hotel Sonargaon.

Regarding the song and her musical journey singer Shusmita said, “Around last year, Tahsan and I began working on this song. It is such an honour to work with him as he is so humble and co-operative. We were aiming for Valentine’s Day this year.” Shusmita said the entire team worked meticulously for the song. “It is a very big collaborative project. We wanted to find the right kind of balance for both of us and have the proper co-ordination. So, we went back and forth regarding many decisions and took a lot of feedback regarding the song. Even we had no idea on what the final output would be with all the diverse combinations, but the result was absolutely phenomenal and we are very happy about it.” Shusmita has also collaborated with other artists in the past and hopes to do so in the future. Her musical journey began under the care of the late Feroza Begun who was her aunt.  She was groomed in classical but explored other styles too eventually. Her main forte lies in blending a classical touch with a hint of modern music. No wonder all her songs are so spectacular and have been widely liked by many people.

On the other hand, Tahsan Khan is one of the heart-throbs of the nation. A prominent singer, a renowned actor, a soulful lyricist and composer as well as a brilliant academician, Tahsan has many talents under his belt all of which are equally profound. Tahsan is expecting that ‘Smritir Fanush’ will surely impress audiences of all ages. He said, “Shusmita and I wanted to do a song for Valentine’s Day. She is mainly a classical singer but is also interested in making original songs. I also release a song each year for Valentine’s Day. So, we decided to do this song. Limon and Menon did the lyrics and tune. I wanted to change the lyrics a bit, so I sat down and gave my own input. We all worked together and then felt that the final outcome was very satisfying. It had a romantic theme that was ideal for Valentine’s Day. We wanted to do a grand video. Both of us are very busy and it was not possible to go abroad to shoot the video. So, we decided to shoot it in different places of the country with a few elements created in the video such as the snowfall.”

Director of the music video Nahiyan Ahmed said, “The making of the video was an elating experience for our team since we had to create something special for our viewers.” Tanjin Tisha who modeled for the music video said, “Smritir Fanush is an exceptional project and is definitely going to win the hearts of all my fans and viewers.” Irfan Sajjad said, “The storyline of the video is very sweet. I must say the song inflames the passion of love.”

The music video deserves mention for its breathtaking scenes, all of which were shot in Bangladesh. They have even simulated snowfall that looks very much like real snow. ‘Smritir Fanush’ is a release under the label of New Music Paradigm Company.