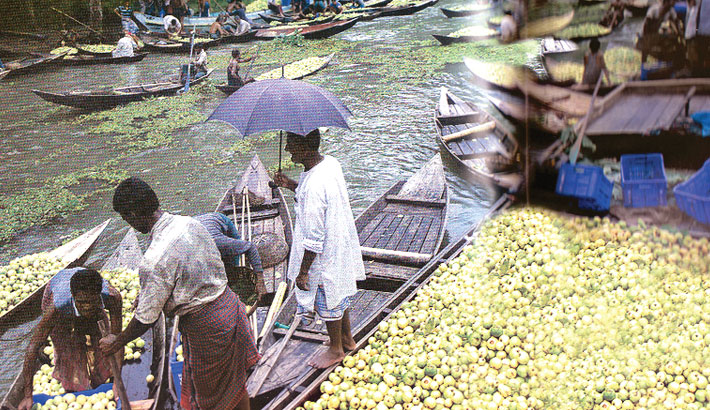 Bangladesh is the largest delta in the world that is crisscrossed by hundreds of serpentine rivers. The southern region of Bangladesh is interwoven by thousands of canals, tributaries and distributaries of rivers and is blessed with innumerable orchards. Jhalokati,  a river-basin district of the southern region, offers a soothing milieu under the canopy of thousands of guava orchards.  Jhalokati is coined as the Venice of Bangladesh.

The floating guava market of Bangladesh is located in different parts of Jhalokati and Pirojpur districts. The most famous and largest floating markets of Bangladesh are Bhimruli and Atghar in Jhalokati district and Swarupkathi in Pirojpur district. The floating markets are compared with Thailand’s floating markets. The largest guava market of Asia sits at Bhimruli on the estuary of three canals coming from different directions. Guava is cultivated along the small canals and ripped guava is collected from the orchard by dingi (small country boat).

Bhimruli, an amazing floating market, famous for trading guava, Amra (hog plum), banana and other local fruits and vegetable amuses the tourists. The Bhimruli River in Pirojpur is abuzzed with thousands of domestic and foreign tourists every year, particularly in the month of July-September.  This floating market is 200 hundred-year old that offers a unique landscape. Tourists love to visit the floating market for having a lifetime experience. Every year, the guava market starts here since first week of July that continues till September.  Trading of guava normally starts in the morning that lasts till noon.

The eye-soothing guava orchards alongside canals and the rivers of Jhalokathi named Sugundga, Bishkhali, Gabkhan and Sandhya are the main places of guava farming because of its fertile land. From this spot, thousands of tonnes of guavas are supplied to all other districts of Bangladesh. Here, country boats are the key transportation for supplying. Farmers carry guavas through boats from the river-adjacent orchards. The lush-green guava orchards are sources of immense beauty and attract tourists from home and abroad to visit the orchard. Tourists can have guava at a very cheap rate from here.

During July and September, hundred of boats are filled with guava while its trading takes place on boats. Both farmers and wholesalers come here by boats. Buyers take away purchased guava by boat. This floating market really looks beautiful.  As this place is famous for plenty of world-class and delicious guava, the government of Bangladesh is mulling to establish juice and jam factories here.

There are around ten thousands large guava orchards in Jhalokati district. When tourists set off towards the floating markets, they can have a glance of the guava orchards. It seems as if the tourists move back ripping the hearts of guava orchard. Besides guava orchards, tourists can enjoy a view of the landscape of the beautiful village dotted with traditional and modern houses. Tourists can also see the shades of blue all around amidst the lush green.

To reach the floating guava markets in Jhalokati, tourists can go by air to Barisal and then by road to Jhalokati district by hired cars. At Jhalokati, many traditional and engine boats are available. It takes only Tk 300 to 500 per boat for the journey towards the orchads . Bhimruli floating market can also be reached by other means. Tourists can have a journey by lunch from Dhaka to Jhalokathi district town and then they can reach the tourist spots by tradition transports to Bhimruli boat-ghat.

The number of tourists, both domestic and foreign, is gradually increasing every year in the floating guava markets. The traditional floating market impresses tourists by its serene beauty and traditional trading system, that is believed to be the oldest one in the Asian continent. The canals and rivers are still in good condition and there is no risk at all for boat journey.

The author is Manager (PR), BPC.