Shitol Pati: A Heritage On The Verge Of Extinction 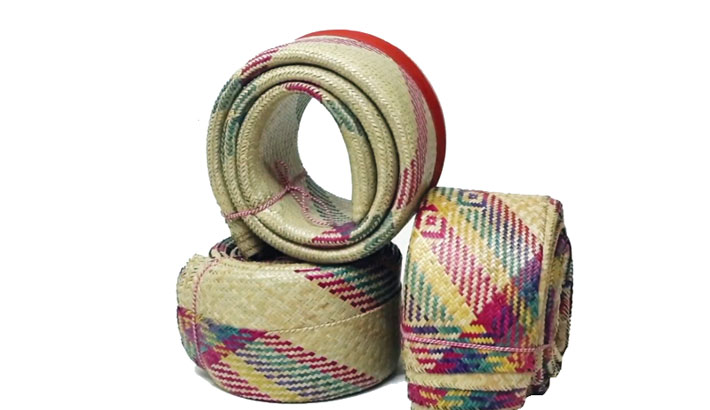 Living in rural area in Bangladesh offers some special charms. The tiny earthen homes, the open place around them and the daily commodities made from natural raw-materials deliver a true feeling of being in touch of nature. The rural people always try to solve their problems with the materials they collect from the natural sources. Shitol Pati is one of the examples of such natural resource. The name of this special mat indicates to its use literally. ‘Shitol’ means cool and ‘Pati’ stands for mat. Thus Shitol Pati refers to a cool mat. Over the years, Shitol Pati was actually an integral part of Bengali culture. It was immensely entwined with our life and influenced our literature too. Shitol Pati struck many poets to their poetic essence enormously. Thus several poets have mentioned the name and amazing features of this splendid mat in their poems. In his poem ‘Khati Shona’ (Pure Gold), Satyendranath Dutta compared the affinity of the soil with Shitol Pati. And Polli Kobi Jasimuddin mentioned about ‘kamranga pati’ (Shitol Pati) in his famous creation ‘Nokshi Kanthar Math’ (The Field of the Embroidered Quilt). But gone are those days. Use of this mat has reduced nowadays. Some tradition-bound people keep the use and business of Shitol Pati alive, though in a ramshackle state, many youths of our new generation even do not know what Shitol Pati actually is. Thus losing its past glory this customary element of our national heritage is now on the verge of extinction. 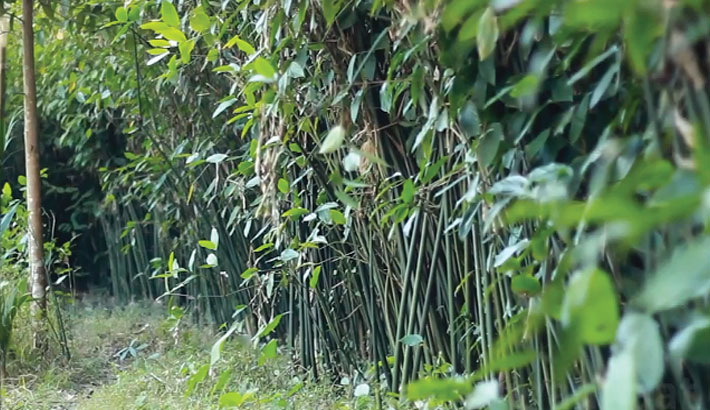 Shitol Pati is commonly made from strips of a green cane known as ‘Murta’, also familiar as mostak, patipata, patibet and paitara in different regions of our country. As this Murta plant is grown wildly around the water bodies of Sylhet, about four thousand families from around 100 villages of the greater Sylhet region are traditionally involved in making various craft items. Apart from Sylhet, Shitol Pati is also weaved in different villages of Noahkhali, Shirajganj, Pabna and Chattogram districts. Depending on the types of Shitol Pati, weavers prepare the Murta, and the finest Murta makes the most excellent Shitol Pati. After tying the bunch of Murta together weavers boil it into rice water with hog plum, giant crape-myrte, tamarind and some other leafs. The boiling adds natural grace to the cane and makes it strong. Sometimes, the processed canes are also boiled in coloured water to weave a colourful mat. It may take three days to a month time to weave a mat depending on its type and design. 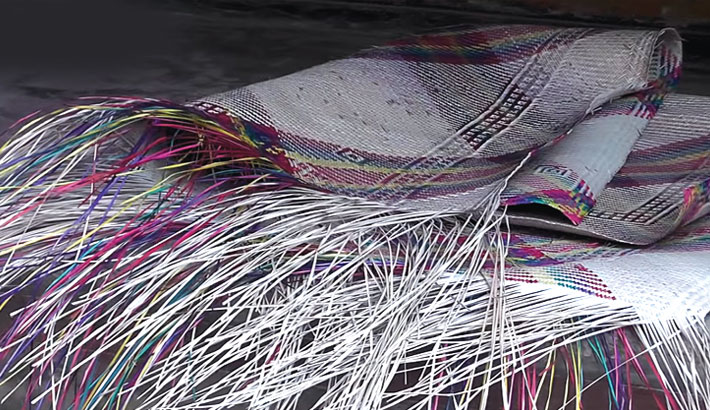 We all know that traditional handcrafts of our country always fascinate common people with their amazing artistic essence. Shitol Pati is no exception in this regard. There are differences in quality of Shitol Pati, though all of them are made following geometric pattern. Shiki, Adhuli, Taka, Noyontara, Ashmantara, Shapla and Shonamuri are some common types of Shitol Pati, while Lalgalicha, Dhadhuli and Mihi are considered as some of the extraordinary decorative types.  Generally, these mats are seven feet long and five feet wide. Like other handcrafts of our country different stories of the weavers’ life are depicted on the canvas of Shitol Pati. Realising the significance of Shitol Pati, UNESCO recognised it as an intangible cultural heritage of Bangladesh in 2017. Intangible is cultural heritage refers to the very important cultural element which should be maintained to preserve cultural diversity in the face of rapid globalisation. It means Shitol Pati has achieved Geographical Indication as quintessential Bangladeshi product. This recognition is not only about a cultural manifestation rather it speaks of the rich knowledge and skills that has been transmitted from one generation to another. 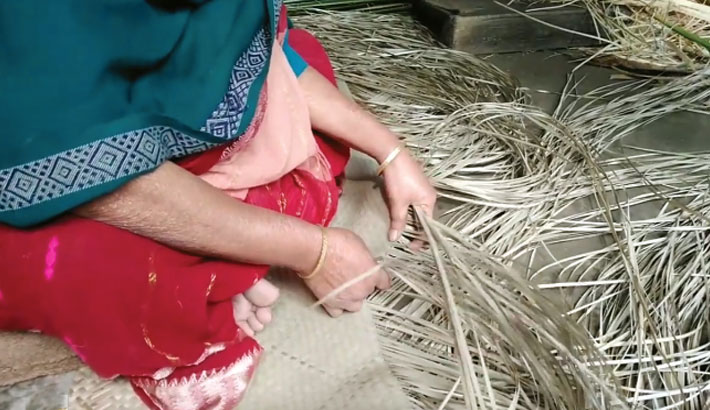 The important fact is the craft is a major source of livelihood of thousands of families of Sylhet region and it is strongly related to their identity as well. Currently knowledge and skills of weaving Shitol Pati is preserved only by a few minority groups. During summer and rainy season, Shitol Pati fairs are arranged in different corners of Sylhet. Weavers from nearby region participate in these fairs to sell and showcase these gorgeous handmade mats. Jahirul Islam, a Shitol Pati weaver, said, “The fairs are popular in Sylhet region. Every year, around twenty Shitol Pati fairs are arranged in different areas of Sylhet. Depending on the quality and size a Shitol Pati costs one thousand taka to twenty thousand taka.” But, many weavers are giving up their family profession as earning from Shitol Pati weaving are not satisfying them as they are struggling to support their families. 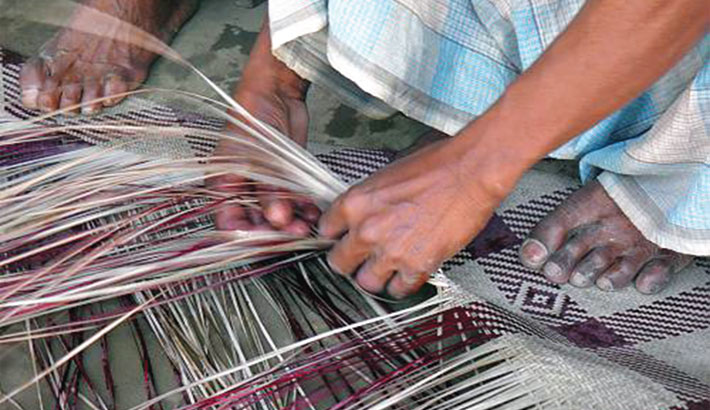 Nowadays Shitol Pati production is becoming tough due to different reasons and weavers are facing hurdles from different corners. With the touch of modernisation people have adopted rapid changes in their lifestyle. In addition rising incomes have stopped people buying authentic local goods like Shitol Pati. As a result demand of Shitol Pati is decreased in the local market. Moreover, the business of Shitol Pati gets stuck in summer season only. Thus the people who involve in weaving and marketing of Shitol Pati are undergoing a fragile situation. 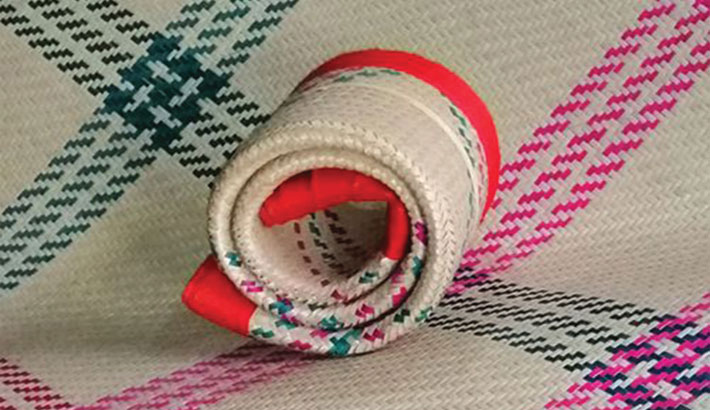 If Shitol Pati producers could get special support and patronisation from the government it could easily be a potential sector for the country. It is the responsibility of the Ministry of Cultural Affairs and the Ministry of Commerce to conduct necessary promotion of this rich cultural heritage and encourage the weaver communities so that they can preserve, promote and develop their products, and as well as improve its value in economic terms. The simplest way to promote Shitol Pati is arranging exhibitions, creating awareness about its cultural value and exporting it to the foreign countries. In recent years, many private organisations have stepped forward to sponsor some exhibitions to showcase the magnificence of Shitol Pati. More of such initiatives are needed to save this excellent work of art.