Hrithik shares a ‘nice’ picture of himself, asks us to keep hope alive 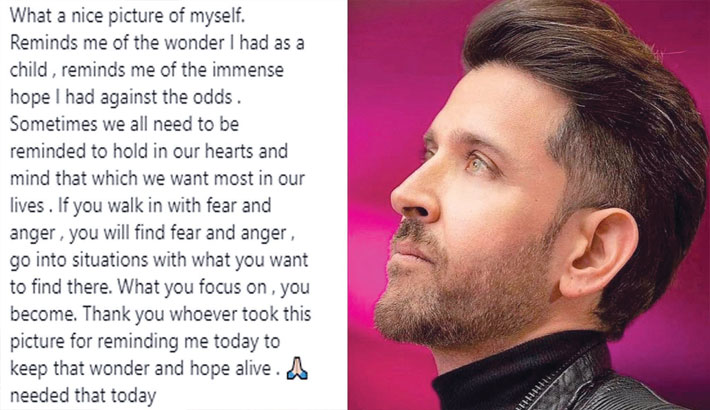 Hrithik Roshan isn't just the most handsome man in Bollywood, but also one of the most inspiring ones. His interviews, pictures, and quotes are always filled with positivity and happiness, no matter how much turmoil the actor may be going through, reports Mid-day.

And one such example was his latest Instagram post that was both thoughtful and beautiful. In the picture he shared, the actor was lost in his own thoughts and shared a nice picture of himself, in his own words. He wrote a long caption that's an inspiration to all of us how to keep hope alive. Hope is what has kept him relevant in Bollywood for two decades. When his career slumped and professional choices backfired, it was hope that put him back to the pedestal. And now, he stands tall and proud with two consecutive hits- Super 30 and War. Fans and friends have no idea what his next film would be, Krrish 4 or something else.

However, what they do know is that even when he falls in the future, he will stand and rise like a Phoenix, all because of hope!