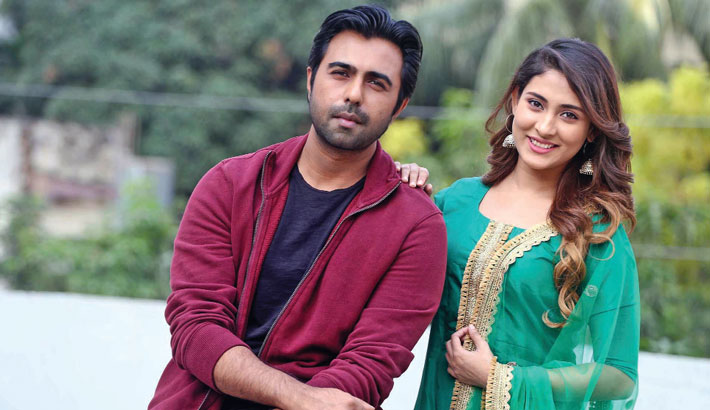 Popular actor Ziaul Faruq Apurba and actress Mehazabien Chowdhury have paired up again in a special drama for Valentine’s Day. The audience will see them in the drama ‘Charur Biye’. Written by Nazia Hasan Adity and directed by Mizanur Rahman Ariyan, the shooting of the drama has already been completed at different locations in the capital’s Mirpur and Uttara area on January 25, 26 and 27 respectively.

Apurba, the prince of Television drama, has played the role of Adnan and popular actress at this time Mehezabein, has portrayed the title role in the drama.

“Basically, it is a family drama. Audience will see the common scenario of a society in the drama. Besides Apurba and Mehazabien, Al Mamun, Mili Basher, Arjumand Ara Bakul and others will play roles in the play”, said Adity, the writer of the drama.

“The drama Charur Biya will be aired on a television channel on the occasion of Valentine’s Day”, she added.

Apurba said, “I have tried to give special attention to the drama because the story of the drama is very nice. Mehazabien also has performed well in her part.  I am very hopeful about the drama.”

On the other hand, Mehazabien said, “The story is amazing. I have tried my best to portray myself according to the character. I hope the audience will also enjoy the drama very much.”