A museum that spreads light of knowledge 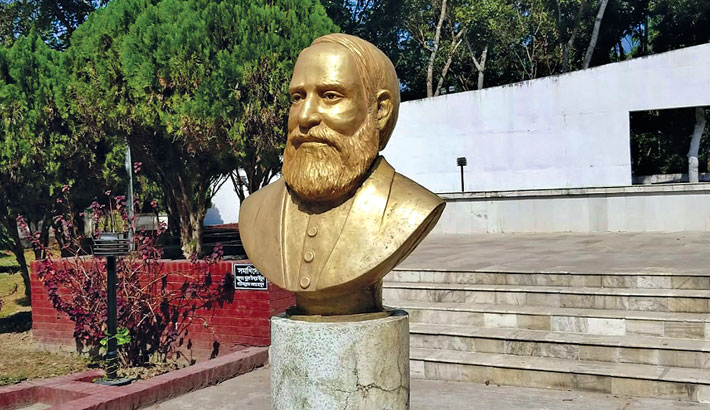 Mir Mosharraf Hossain Memorial Museum is located at Rajbari. The museum was established commemorating the great writer, Mir Mosharraf Hossain. It spreads the light of knowledge. The establishment of the museum has a great positive impact on the society, especially among local youths. This museum also reflects the rich cultural and literary works of Bengal Muslim renaissance. Different galleries also display the pictures of the then socio-economic and cultural context.

Different kinds of moral quotes of the great writer have been inscribed in the museum. Some of the quotes are given below:

"Are there such black sheep traitors who surrender their most valuable thing like freedom to other for saving own lives?" This is a quotation from Mir Musharraf Hossain’s 'Bishad Sindhu' (Ocean of Sorrow), a popular classic among the Bengali readers.

"Many people can save themselves from the claws of arch enemies, but once the friends become foes, it is too difficult to be saved." This is another quotation from 'Eslamer Joy' (victory of Islam), a prose written by the immortal writer.

The Museum complex looks very cute amidst the lush greenery in surroundings. The Museum spreads light of knowledge of this great writer.

Inside the museum, visitors will find many rare collections, historical photographs and display of great works of Mir Mosharraf Hossain. There are some agricultural tools, chairs, glasses and dresses and some armours used by the prominent writer. Some collections of his used materials are displayed in the museum that will amaze the visitors. Some collections of his great writings and journalistic works enlighten the tourists. Every month around four hundred tourists, students, researchers and other professionals and general people come to visit the museum.

Tourists can easily visit this museum from Dhaka. They can go there by own transport or private buses to Rajbari via Aricha ferry-ghat.  From Rajbari, they can go Baliakandi Upazila and to the museum by local transports - easy bike or scooter. Though there is no standard accommodation in Rajbari district town, tourists can stay at the district council guesthouse.

Mir Mosharraf Hossain was born at a Muslim aristocratic family in 1847 at the village Lahinipara of Kumarkhali Upazila under Kushtia district. But, most of the time of his life he spent at Padamdi of Balikandi Upazila under Rajbari District to supervise his ancestral land property. It was his ancestral house. Here his grandfather Mir Ibrhaim was born in Nawab family. Mir Mosharraf Hossain also expired here at Padamdi village in 1911. In 1999, the government of Bangladesh built a memorial complex and a Museum near the family graveyard of Mir Mosharraf  Hossain at Padamdi, Rajbari.

Mir Mosharraf Hossain was an eminent Bengali language novelist, playwright, essayist and one of the finest prose writers of Bengali literature in 19th century. He is still very popular for his novel 'Bishad Sindhu' written in between 1885-1890 and Drama and 'Jamidar Darpan' written in 1873. He is considered to be the first novelist emerged from the Bengal Muslim society. His magnum opus 'Bisad Sindhu' basically created depicting the tale of martyrdom of  Hassan and Hossain, the most affectionate two grandsons of Prophet Hazrat Muhammad (Sm). The Jamidar Darpan was about the suppressed peasants of Bengal and their uprising during the British colonial period. The main story was of peasant uprising against landlords in Sirajganj in the period of 1872-'73.

In fact, there are two memorial museums of Mir Mosharraf Hossain - one is at Padmadi village of Baliakandi in Rjabari and another is at Lahinipara village of Kumarkali in Kushita district. In the year 2008, the government of Bangladesh also established an auditorium at Kumarkali at his birthplace along with a primary school. This place is also used as Museum named after Mir Mosharraf Hossain. Therefore, guest may visit both the Museums. Because Kushtia is very close to Rajbari.

The writer is Manager (PR and FL), Bangladesh Parjatan Corporation