An Excursion Worth Reminiscing 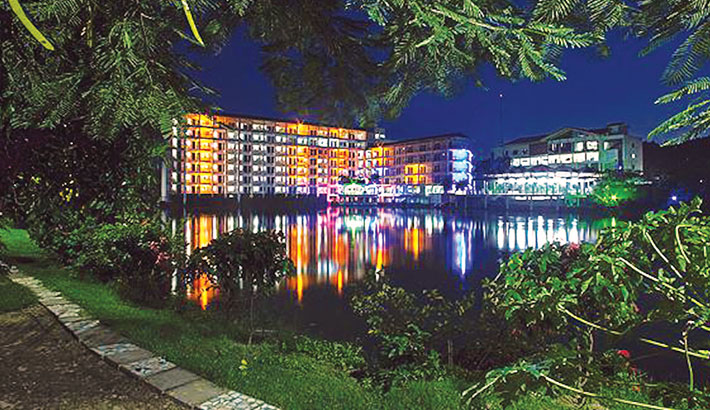 In a bustling city fraught with a plethora of problems, where people are tired of the humdrum life, a day or two day off from the drudgery of daily routine can turn out to be winding down for anybody.  And it could not be any better if the day out is a corporate outing lined with the annual planning session and a string of leisure and recreational activities. I was lucky enough to have the wonderful opportunity for the first time to take part in such an event set up by our organisation, Thakral Informaton System Private Limited (TISL) to tour the BRAC-Centre for Development Management (CDM) in Savar, on the outskirts of the city, on January 11 and 12.

A 30-minute drive from the city centre, we headed towards the venue by car braving the shivering cold in the winter morning.  As we checked in, a group of well-groomed and good-mannered staff at the reception of the facility welcomed us with open arms.  Having breakfast, we turned out in a giant conference hall aptly suited for a large-scale meeting like the one we had for the planning session. The futuristic touch in the interior decorations inside the hall and its ambience can make the nervous atmosphere and tedious statements or speeches of the bosses pleasant and attractive for the audiences.  However, our Chief Executive Officer’s (CEO’s) short and sweet initial speech and inspirational slides broke the ice and put the wheels in motion of the two-day event.

Afterwards, we checked out the premises and packed a lot into recreational activities. Some took up the outdoor games—cricket, badminton, tennis, football-- on a huge green turf with a gallery located at the facility while others liked playing indoor ones—chess, carom, table tennis et cetera. A few others chose to sit on the gallery and look on. The rest either preferred to pave the walkways around the enormous lake, laze around, soak up the atmosphere or just take in the serene beauty of the lake and its lush green surroundings.

As the cold spells were on, many of us were seen basking in the sun under the open sky on a deck thrust out of a building above the lake. The deck offers a magnificent view of the lake below, which is home to numerous spices of indigenous fish and aquatic resources. As well as fishing with rods or tackles, the lake offers rowing pleasant boats across it for the tourists. Reasonably, the services are not meant for gratis though. Nevertheless, the grandeur, enormity and fascinating view of the lake and its surrounding walkways would certainly make any visitor spell-bound.

As the evening wore on, we began to gather under a massive shed built on a structure sticking out from a side of the lake. The artistic undulating view of the shed is evocative of a range of hillocks in the countryside. Now it was a party time. The party went with a bang. Everybody was in boisterous mood. Some were singing songs and having chit-chat. Some others started light-hearted conversation, while the funniest thing was a few others were going around the tables making banter with colleagues, cracking everybody up.  Not a single person was found to be cheerless. Even the wet blanket managers or leaders were seen to be easy-going, affable, chatty and socialising themselves mingling with others. It was a fun-filled evening with Bar-B-Que, local delicacies and exotic cuisines made by the culinary-skilled chefs of the CDM.

The following morning we woke up to the chirping of birds and quack of ducks of the establishment. A get-together was scheduled for taking the traditional ambrosia-date juice in the winter morning on a rooftop terrace tailored for holding such events. The gathering was buzzed with small talks among us.  Meanwhile, some of us were found to be getting in the mini gym and dong exercise with treadmills, rowing machines, and exercise bikes in a bit to burn some calories.

As the balcony of the room allotted for us overlooked the landscapes in the distance, we enjoyed the breathtaking view of the vast swathes of verdant areas in the vicinity, while as an Achilles hill unchecked growth of urbanisation with smoke-emitting, environmentally hazard industries standing out at some places also came to our notice. Besides, blindingly obvious was the flood of accident-prone, power-guzzling, indigenous three-wheelers all around. However, BRAC-CDM looks to be a venture of perfect ecological balance at the suburb of the city.  It has been a breathing space for the people dogged by mind-numbing daily routine of the city life. So, the government should come forward to stemming the tide of unplanned growth and industrialisation in order the preserve the environmental sanctity of the area.

On the whole, it was a rendezvous to breathe a new life into the dreary existence of the city life for the people like us. We ate out more than we do at home; we indulged in rich foods that we normally avoid. We treated ourselves to enjoyable experiences by playing games, singing songs, shooting photos, and whiling away in order to round off the event, though the whole set-up tempted us to stay on. The two-day outing went like a dream.  It has been a perfect tonic for us under a unique setting laced with modern amenities and a touch of natural environment that lends a feeling of being in an off-grid area. The venue is outright a place to be reckoned with while planning for next holiday retreat, corporate outing or anything of that sort.

The writer is the Associate Engineer of Thakral Information Systems Pvt. Ltd.