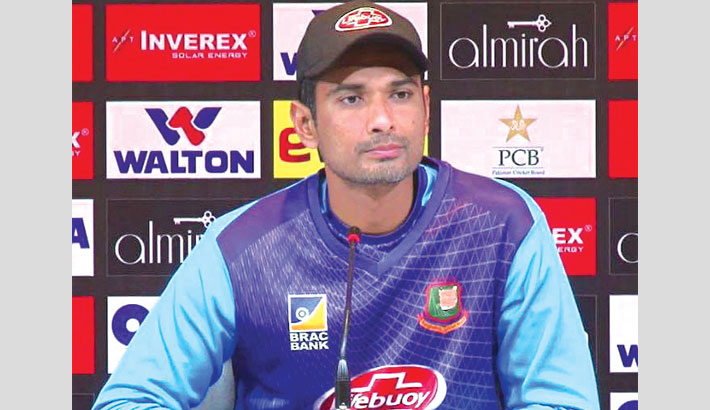 Bangladesh skipper Mahmudullah Riyad said on Monday that he is disappointed that Tigers couldn’t put up a better show against Pakistan in the just concluded three-match Twenty20I series in Lahore.

Pakistan clinched the series by 2-0 matches courtesy of winning the opening two games while the last game of the series was called off due to rain.

“They are the number one ranked T20 team and we are number nine. But as captains, I wanted give off a better performance, a better show, which we did not do. I think, the talent and the potential was there but we did not execute our skills well enough and we are better than that,” Mahmudullah told reporters at Lahore on Monday.

“Credit goes to Pakistan cricket team. They were better than us obviously,” he said.

“Bowlers did well in the first game, and in the second game, batsmen have to take the blame I think because we did not put enough score on the board. So, we need to look at these areas on which we need to improve and play according to the plan. Because this is such a format where we need to keep searching for the momentum and proper guidelines to play well consistently,” he said.

“Probably in the first game we put up a little fight but we were little short on runs. In the second game they won it convincingly. We need to sit back and identify the areas on which we can improve. Probably this is the format on which we need to keep on improving because we have got a very young team at the moment. We need to give them a bit of opportunity and time to gain experience. Hopefully they can come up with good performances,” he said.

Mahmudullah said that he was satisfied with the security and added that he is looking forward to play in the upcoming Test series that will be held in two phases with the opening Test scheduled to start from February 7.

“The thing is that, I have been here before. Lahore is a wonderful city, the hospitality, the arrangements have always been up to the mark. This time we experienced a great city and the arrangement was good and hopefully we are going to come back again for the Test matches,” he said.

Mahmudullah said that Pakistan pace unit proved their worth once again as they kept putting Bangladesh under pressure.

“I always feel that Pakistan has a huge factory of fast bowlers. They have a bunch of good fast bowlers. Haris Rauf has been very good with both the new ball and old ball. Shaheen Afridi doing very well. I think they always have and had a very good pace bowling attack,” he said.

“But as I mentioned, the wicket was not too easy to bat on. Because I think, we took some time to understand the wicket and we should have approached the game in a different way,” told Mahmudullah.

“That’s not an excuse, next time I think we need to keep this in mind and come up with good idea and execute,” he conclusion.