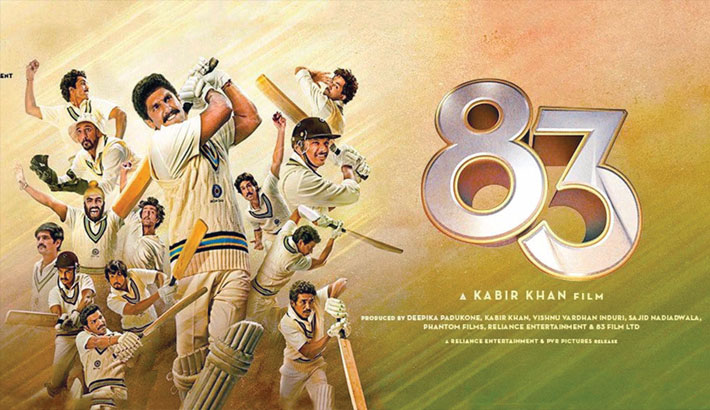 The first look of Kabir Khan’s sports drama 83 was launched amid much fanfare at Sathyam Cinemas in Chennai. Ranveer Singh, who plays former captain Kapil Dev, unveiled it on Instagram. While the makers had been releasing a character poster every day, the first look video shows all posters, followed by a still of the entire team. The poster of 83 was unveiled amid great fanfare at Sathyam Cinemas in Chennai, reports Hindustan Times.

Directed by Kabir Khan, 83 brings the incredible victory of the Indian cricket team at the 1983 World Cup alive on celluloid. Ranveer will be seen as former captain Kapil Dev, while Deepika Padukone has been roped in to play his wife Romi Bhatia. Other cast members include Harrdy Sandhu, Saqib Saleem, Tahir Raj Bhasin, Ammy Virk, Jatin Sarna and Chirag Patil, among others.

Earlier, in an interview with IANS, Kapil Dev said that he was taken aback by the “uncanny similarity” when he saw Ranveer in the first look of 83. “I was surprised! At one glimpse, from a distance, there is an uncanny similarity. Of course in close-up, one can understand that it is Ranveer Singh and not me! But I have to say the makeup artiste has done a great job. I appreciate that,” he said. Ranveer told India Today in an interview last year that it was extremely difficult to get the legendary cricketer’s signature run-up and bowling action right, and he “changed (his) own body mechanics” for it. He said, “Mushkil hai. (It is difficult.) There’s a lot of neck and back in it. His body mechanics are very unique to him. Only his body, the way it is genetically structured, can execute that action. It is very tough to emulate. But I have been at it. I have changed my own body mechanics around to be able to do it.”

83 is scheduled to open in theatres on April 10 this year.