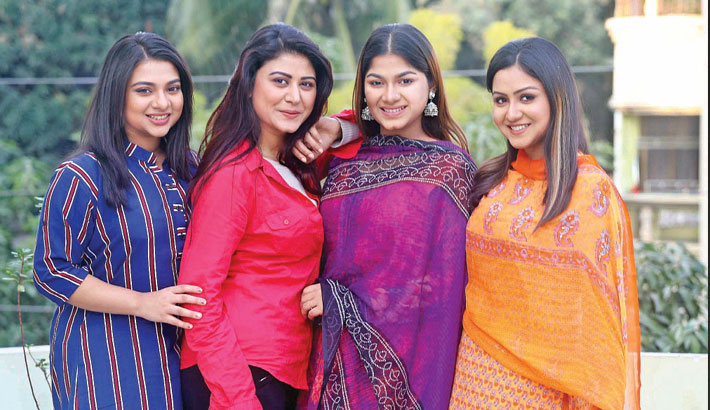 The comedy genre serial has been written by Yousuf Ali Khokon. The first lot of shooting is underway at different locations in the capital’s Uttara area.

The plot of the drama revolves around five sisters. Promising actresses Parsa Evana, Kajol Suborno, Nishat Priom, Shamantha and Mim Chowdhury will be seen in the serial as the sisters. Mahmudul Islam Mithu portrays their father charater.

About the serial Evana said, “Sokal Ahmed is a talented director. I have acted under his direction before. He makes all his tele-dramas with utmost care; this drama serial is not the exceptions. We enjoyed a lot during shooting.”

Kajol Suborna also said, “I have portrayed a ‘tom boy’ character in the drama serial. I have tried my best to bring out the character.”

Nishat said, “This is my first work under Shakal Bhai (Sokal Ahmed). My character in the drama is quite different. I am enjoying myself a lot.”

The drama has been jointly produced by Tuhin Barua and Kazi Riton. The serial will be aired on Boishakhi TV soon, said the director.