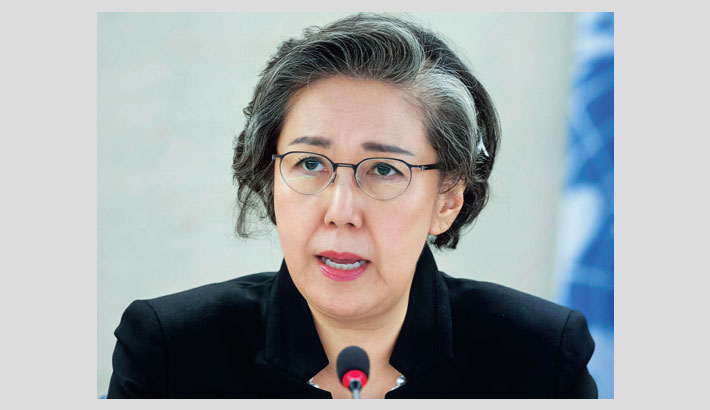 An independent human rights expert said she has not given up hope for democratic transition in Myanmar even though the country is yet to address ‘grave allegations’ of international crimes, including possible genocide.

This was stated by Yanghee Lee, Special Rapporteur on the situation of human rights in Myanmar in a statement at the end of her last official visit to neighbouring Thailand and Bangladesh on January 23.

“I have lost my optimism”, she said. “How could I be optimistic with ongoing credible allegations of war crimes, crimes against humanity and possibly genocide having been committed in Myanmar, and with justice and accountability still not yet within reach?

“But I still hold out hope that the promised democratic transition will proceed, as it is not too late for the government to change the course it is currently set to. The Myanmar government must face up to its responsibilities, obligations and duties.”

Lee is currently a professor at Sungkyunwan University, Seoul, and serves on the Advisory Committee of the National Human Rights Commission of Korea.

She was appointed by the UN Human Rights Council in 2014 and will deliver her final report in March. Her mandate falls under what is known as the Council’s Special Procedures, an independent fact-finding and monitoring mechanism to address specific country situations or thematic issues.

Special Rapporteurs are not UN staff. They serve in their own capacity, and are not paid for their work.

She had conducted biannual visits to Myanmar until being denied entry from December 2017 onwards. As she was again barred from entering for her final visit, Lee travelled to Thailand and Bangladesh to gather information about the situation in Myanmar.

The end of her mission coincided with a decision by the UN’s top court, the International Court of Justice (ICJ), ordering Myanmar to protect its Rohingya population from genocide. Lee has welcomed the ICJ decision.

More than 750,000 members of the mainly Muslim minority group fled Rakhine state in northern Myanmar nearly three years ago following a reported crackdown by the military, known as the Tatmadaw, in response to deadly attacks against police and security posts carried out by separatists known as the Arakan Rohingya Salvation Army.

During her final mission, the rights expert met with scores of refugees in Cox’s Bazar, Bangladesh, who spoke of the horrors they had suffered. “I met with male survivors of sexual violence. They told me of the rape and gang rape that they endured at the hands of the Myanmar military and security forces in Rakhine”, said Ms. Lee. “I also met Rohingya Christians who told me they were persecuted by the Myanmar Government due to their religion.

“Refugees I spoke to were firm about their deep desire to return home. However, I was informed of ongoing violence, continuing restrictions on movement, forced imposition of National Verification Cards, and people being killed and injured by landmines in northern Rakhine. Conditions remain unsuitable for their return.”

Intensifying conflict between the separatist Arakan Army in Rakhine and national armed forces is having a devastating impact, she said, which has been worsened by Government restrictions that include internet shutdown and blocking aid in some townships.

“I am also very worried about both sides engaging in disturbing tactics including abductions and mass arrests, and how this is instilling fear in the civilian population”, she added.

Yanghee Lee observed that while the Myanmar authorities have taken steps towards international justice and accountability in recent years, more action is still needed.

With elections slated for this year, she called on the Government to ensure the vote is peaceful, credible, free and fair, and that all people can participate in the process.

“Some people told me they are worried that polling may not be allowed in parts of Rakhine and Shan for security reasons”, she said.

“If that occurs, distrust towards the next government and community grievances and marginalization that already exist are only going to grow stronger, and this will further hamper efforts to move forward in the democratic transition and peace process”.