‘Were a bit short on runs’ 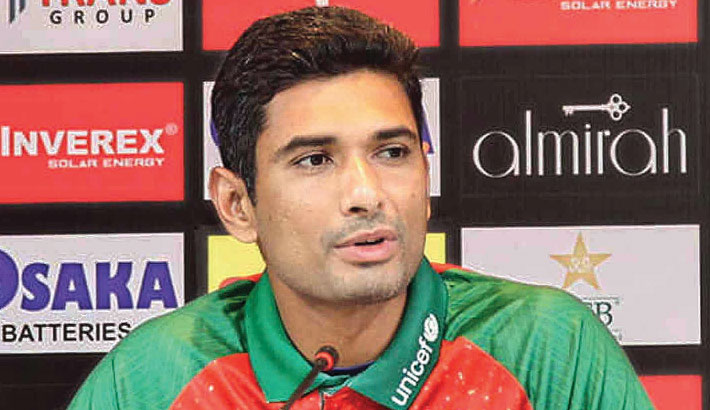 Bangladesh skipper Mahmudullah Riyad said on Friday that they were 10 to 15 runs shorts against Pakistan and it proved crucial for them in the three-match series opener against the hosts at Gaddafi Stadium in Lahore on Friday.

Bangladesh put up 141 runs for 5 wickets after opting to bat and the score never looked enough to resist Pakistan even though the pitch was on the slower side.

Shoaib Malik came up with all of his experiences to make it Pakistan’s day after the hosts faced hiccup initially as Pakistan reached the target with three balls to spare with five wickets in hand to lead the three-match series by 1-0 margin.

“Personally I feel I should have finished the innings well,” added Mahmudullah.

Mahmudullah added that he was quite surprised with the behavior of the wicket as a slow paced wicket was provided for the series opener which prevented their batsmen from playing their natural game.

Though Bangladeshi opener Naim Sheikh (43) and Tamim Iqbal (39) added 71 runs for the opening stand but that came at such slow pace that it created an adverse impact on the middle order and they just could not get the ball rolling despite being 110 runs for 1 wicket after 15 overs.

However, Mahmudullah did not agree that the openers batted slowly rather said that the wicket was to be blamed for playing in such manner.

“I believe the way we batted in the power play was spot on. Tamim Iqbal and Mohammad Naim batted quite well. But as the ball lost its shine, it was getting difficult,” said Mahmudullah.

“Openers gave us a brilliant start. In the middle overs, we lost two wickets in an over that too one of them was of a set batsman. Naim was set and looking good. From that point onwards, if we were to drag the run-rate higher, we would have needed some big overs which yielded some 15-17 odd runs. I think that was one of the areas which we lacked in. Credit goes to the Pakistani bowlers as well. They nailed their Yorkers and mixed up their pace quite well. We will keep these things in mind and try to get better in the next game,” added Riyad.

“I expected a better wicket because once the ball got older we found it difficult to score runs because the ball did not come on to the bat as we expected,” said Mahmudullah.

“It was difficult for the latter batter to come and hit straight away. Once the ball gets old it was difficult to bat. The ball was not coming the way we were anticipating the ball was holding on and the batsman struggled to get underneath the ball. So, probably something to look on for the next game,” he said.

Mahmudullah said that he is happy with the effort of his bowlers but added that the performance of the fielding unit was below-par.

“Though the bowlers bowled well, we gave away easy boundaries in the leg side as we conceded six or seven such boundaries. If we could have bowled better and improve our fielding, it could have been better,” told Mahmudullah.

“We failed ourselves in the fielding department. We dropped some catches and missed on run-out chances. Otherwise it would have been a different story,” he said.