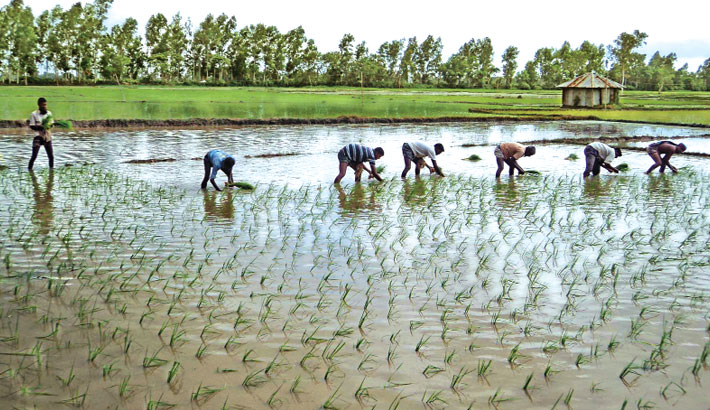 BOGURA: Farmers of Bogura district are passing busy time to transplanting boro paddy seedlings from the beginning of Bangla month Magh and it will continue till next couple of week.

According to Department of Agriculture Extension (DAE) office, the department has estimated some 1,97,999 hectares as Boro rice cultivation this season to produce over 7 lakh tonnes of fresh output.

Meanwhile the farmers of all twelve upazilas have brought over 65000 hectares of land under the farming and they are trying to finish the work as early as possible, DAE added.

After remaining idol some days, the thousand peasants including ethnic farmers are passing busy time to transplant the paddy due time, said farmers of the district. “I have brought 8 bighas of under boro rice cultivation this season,” said farmer Shahidul Islam under Nandigram upazila. He again said, “I had spent Tk 3,2600 this year to grow the rice well.”

This year he is also optimistic of achieving good yield of the crop as so far the growers are not facing any adverse situation. He has already completed 50 per cent transplantation of seedlings, he further said.

Sub-assistance agriculture officer of the district are providing necessary consultative support to the farmers. The farming is progressing fast as they are getting available labour facility.

Deputy Director of Department of Agriculture Extension (DAE) Md Abul Kashem Azad said this year’s target of boro cultivation in the district will exceed. We are providing logistic support among the farmers, he added.