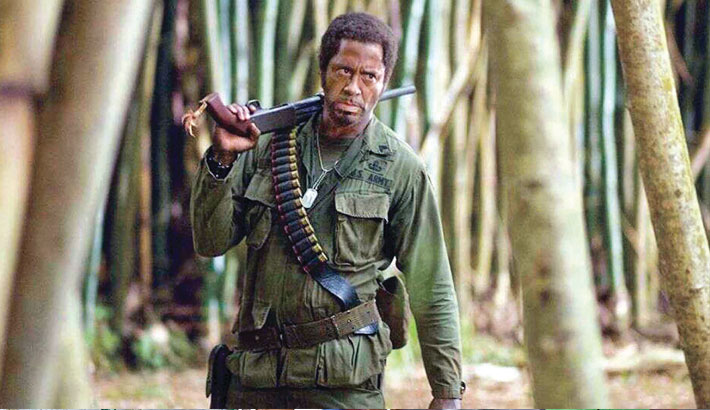 Hollywood actor Robert Downey Jr. recently opened up about his highly controversial 'blackface' role from the 2012 action-comedy 'Tropic Thunder'. According to Page Six, Downey Jr. joined Joe Rogan on 'The Joe Rogan Experience' podcast and shared his thoughts about the 'Tropic Thunder' role in which he played the character of an Australian actor who blackened his face to play a soldier in a Vietnam War movie.

The actor believed that the movie triggered an important conversation that went beyond the issue of racial stereotyping. "I think that it's never an excuse to do something that's out of place and out of its time, but to me, it blasted the cap on [the issue]," Downey Jr. told Rogan

"I think having moral psychology is job one. Sometimes, you just gotta go, 'Yeah I effed up.' In my defence, 'Tropic Thunder' is about how wrong [blackface] is, so I take exception."

The 54-year-old also talked about his apprehension towards accepting the role when it was first offered to him by director and co-actor Ben Stiller. Even his mother didn't have a good feeling about what her son was getting into. "'Bobby, I'm telling ya, I have a bad feeling about this.' I was like, 'Yeah me too, mom.'"

As reported by Page Six, he went on by saying: "When Ben called and said, 'Hey I'm doing this thing' - you know I think Sean Penn had passed on it or something. Possibly wisely. And I thought, 'Yeah, I'll do that and I'll do that after Iron Man.' Then I started thinking, 'This is a terrible idea, wait a minute.'

Downey Jr. added: "The other thing is, I get to hold up to nature the insane self-involved hypocrisy of artists and what they think they're allowed to do on occasion, just my opinion." The actor revealed that a majority of his friends who were black, quite surprisingly, didn't have any issues with him playing the black face character.

However, he did address that a few of them indeed had some reservations towards his role. "90 per cent of my black friends were like, 'Dude, that was great.' I can't disagree with [the other 10 per cent], but I know where my heart lies."

In spite of the notoriety Downey Jr. gained due to the movie, he made his way into the nomination lists of Oscar, Golden Globe and SAG, though he lost all of them to Heath Ledger who played the legendary Joker in 'The Dark Knight'.'